Another Week at The Nuthouse! 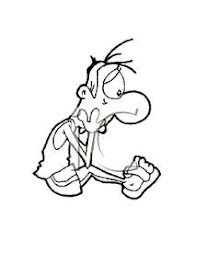 Well, it's back to the grind after another weekend off.  I was going to post yesterday to discuss my dismay with the Super Bowl, but I just didn't have the motivation.  I thought I would give you all time to get back into the grove after the weekend and post today.
I'm going to say it, the Super Bowl sucked and I had really hoped it was going to be a good game.  It had two great teams and two awesome quarterbacks, but alas, my wish did not come true.  Even though I did not care who won, it was quite boring and the commercials also were awful!  Needless to say, my Sunday was not as fun as I originally hoped it would be.  Congrats to Tom Brady on another win, damn that man he unbelievable!
Me and my two furry boyz did have our fair share of snacks over the weekend and when I have snacks, I am the most popular person in the room!  The three of us fed our faces and enjoyed every bad and fattening calorie!  I swear, I sometimes think Milo is a dog in a cats body; that boy can EAT!  He wants everything!  I call him "Marty Mooch" when food comes out, because where ever he is in the house, he will hear it being prepared and makes sure he is right under foot to beg.  Cooper, my damn dog, doesn't beg as much (or as well) as Milo!  He may need to take some lessons!
The Nuthouse...is The Nuthouse; nothing much changes around here.  People are different degrees of annoying throughout the day, but rest assured, The Boss always gives it 100% to be the most annoying person in the room. His new thing today is Mike doesn't feel well, so he must have the 'Rona.  You know how this story goes - he has been playing all year (click here for recap).  Now, I wonder if the "Breaking Bad" hazmat suit will be fashioned again anytime soon or if he will just work from home for a while (fingers crossed that he picks the latter).  I think Mike just has a cold, but we all keep socially distant from one another (who the hell wants to be close to these weirdos), so, I'm not too worried about it.
Tomorrow is "hump day" and I, for one, cannot wait for this week to end!  TTYS Nutties.
Posted by Nutty Wone at 1:07 PM 1 comment:

It's Friday and Super Bowl Weekend!

What can I say, a Friday and the Super Bowl this weekend - it doesn't get much better for this guy!  It's been a looongg and cold week and I am ready to just veg out on my couch and watch the big game with my two favorite furry boyz.  If I am to speak the truth, the furry boyz are much more interested in the snacks that will be consumed, rather than the game, but to each their own.

The celebration for Super Bowl this year is a bit different with COVID.  The party my friend has been throwing for over 20 years is cancelled and everyone is just hanging home this year.  I think we might Zoom during the half time show because no one is really interested in who they booked for this year.  I am not a fan of either team, but I am hoping for a good, close and exciting game with some funny commercials thrown in for good measure.  It's going to be weird to be home by myself, but I have to admit, I am getting used to being stuck in house more often than not.  I think this pandemic is bringing out the anti-social in me and I'm not sure if once it is over if I will ever come back from the "dark side".

Enjoy your weekend Nutties and enjoy then game.  Don't eat too many snacks - god knows this COVID shit has already added on the pounds; but if you do snack, be sure to share with your furry buddies.  Until next week!

Posted by Nutty Wone at 2:17 PM No comments: 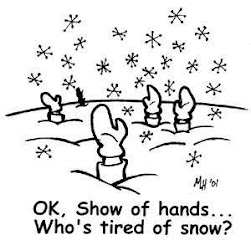 Today is February 2nd, Groundhog Day, and guess what - that weaselly little bastard saw his shadow.  Six more weeks of winter for us!  That was perfect timing for the fricken snow storm that came in late yesterday afternoon and continued throughout the evening.  Waking up this morning to 15" of snow on the ground was not the way I wanted to start my Tuesday.  As you can imagine, things only got better as the day went on (insert sarcasm here).
I left my home a little early because the roads were shitty and I wanted to get to work on-time.  I don't know why I bothered, because everyone else (except The Boss) took their sweet ass time coming in (and they live in closer proximity to The Nuthouse than I do).  When I turned down the snow covered, dirt road this morning, I immediately saw The Boss' car parked on the side of it - not in our lot.  Yup, that's right - the snowplow guy did not bother to show up AGAIN!  I guess since it is Groundhog Day, it is very appropriate that we are living the same nightmare over and over again!  Now, I'm not even going to provide links to the other posts about him not showing up because it is already assumed by everyone reading this blog that that son of a bitch is not going to show up when it snows!
I parked my car behind The Boss - on the side of the road and trekked through the parking lot to the front door.  By the time I got there, I was seeing red!  I walked in the front door and quickly declared at the top of my lungs, that this was total bullshit and that dumb f*ck should be fired.  Now, keep in mind, my declaration was to no one other than The Boss because my co-workers had not shown up yet.  I think The Boss was surprised and a bit shocked by my outburst; for the most part, I am a pretty even- tempered person who does not have a tendency to over-react,  out loud at least, about things.  The Boss looked at me and then looked down and reluctantly agreed, his "friend" needed to be fired.
I put my stuff away, fed Frack and changed my pants and removed my boots.  Yup, I know that I need to bring dry pants to an office job because our plow guy makes us trek through almost two feet of snow to get to the building.  When I came out of the bathroom, I felt a little better - I guess being dry and a bit warmer helps.  I heard The Boss leaving a message on his "friends" voice mail asking where he was and when he expected to be here.  He also indicated that he should come into the office to pick up his check and that he had some things he wanted to discuss.  I can't believe he is actually going to let this ass-face go...I guess I will believe it when I see/hear it.
Around 3 PM (yes, 3 f*cking PM), ass-face arrives to plow us out.  My bet with Drew was that he wasn't going to show up at all (especially after The Boss left the message on his voicemail), but he did.  Damn, I owe Drew another lunch!  He finished plowing and comes in asking me for his check.  I immediately told him that The Boss had it and he went into his office  - The Boss then asked him to close the door.
I didn't hear any yelling, but I did hear ass-face say he didn't think it was a problem that wasn't able to get here before we opened.  He then said to The Boss we were a bit outside of his plow range.  I then heard The Boss say that maybe that should have been told to him prior to him being hired and it is ridiculous that employees working in an office environment have to bring dry pants on days that it snows because of trekking to through the parking lot to the front door.
If I was a betting guy (I guess I am because I currently owe Drew two lunches), I would have guessed that The Boss would not have fired his "friend", but he did and for that color me impressed!  Now, I guess I need to find a new person to plow!
Until next time Nutties.  Say safe and warm and Happy Groundhog Day!
Posted by Nutty Wone at 3:52 PM No comments: