Does Anyone Else Smell Burning Hair?? 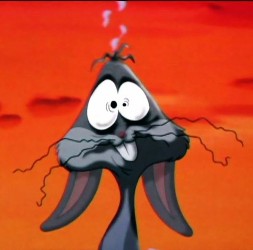 Today was one of the days that our newest warehouse employee, Wayne came in to see how the operation runs before coming in on a full time basis January 1.  The day started off like any other day - the office was freezing and took forever to come to a "life sustaining" temperature.  Adam was going out of his way to do next to nothing and  Alex was cleaning up the warehouse area.

Wayne arrives and says hello to everyone (he still seems a bit jumpy, but maybe it's just his way).  He spends some time speaking with Mike and I quickly realize they know each other.  Now, as I mentioned before, there is no need for eavesdropping due to my location and office size.  I hear their conversation and quickly realize where they know each other from.....CHURCH!  Wayne is "born again" like Mike!

After the rehash of the Christmas service at the church, Wayne goes into the warehouse for the day.  Now, I can only speak to what I have been told and the results - which I was able to see and actually SMELL myself.

It is my understanding that Adam was on the dock, heating up some materials in a 55 gallon barrel with a large fire throwing object that is fueled by propane.  I guess he was trying to burn something off...who knows, I wasn't there.  Adam said he walked away as the flame was continuing in the barrel and someone (Wayne) turned the flame off when he turned his back.  Wayne had extinguished the flame, but neglected to turn off the propane that continued spewing from the wand.  The wand that remained in the 55 gallon drum was filling it to the brim with gas!

Adam noticed the flame was out and asked Wayne to light it up again.  Here's where things went REALLY wrong.  Wayne did as he was asked and re-lit the wand, WHILE IT WAS STILL IN THE BARREL!  I have been told a fireball emitted from the barrel along with a substantial "popping" noise that we all heard in the office.

Wayne came running through the office on his was to the scary bathrooms and Alex told me what had happened.  When Wayne came back from the bathroom he was a site to see.  His shirt had a singe mark, his glasses still had a black, sooty haze on them and his eyebrows were GONE - which gave him a perpetually surprised expression to his face, but he was okay and was actually laughing about it.  The smell of burning hair filled every inch of that office!

It's easy to laugh about it now, because no one was hurt.  It could have been so much worse!  I wish the boss wasn't so close to England and in an area with an internet connection so I could inform him of the catastrophe that almost happened today.
Posted by Nutty Wone at 12:58 AM