I Learned a New Symptom of Color Blindness Today... 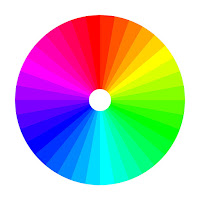 As I have discussed previously, we have a few "nuts" that reside in this Nut House; they seem like nice enough people (a bit strange), but all in all nice individuals.  I have begun to sense a bit of hostility between "The Boss" and the salesman Mike.  I guess a better way to describe it would be, one sided hostility - I think "The Boss" has issues with Mike.  Now, maybe it is his holy than thou, born again Christian ways, but I think it may go a bit deeper than that.  This looks like it could be an interesting, ongoing saga - I'll keep you posted.

Now, back to the main bit of wisdom I learned today.  First of all, Mike is color blind; since he is not disarming bombs, I don't really think this issue would be a problem in his vocational choice of sales.  Clearly, I was wrong!  Today "The Boss" was totally preoccupied with an odor emitting from his office.  This odor could be the result of one of many things - garbage that has not been removed, food stuff that he (the Boss) has not consumed (the man eats CONSTANTLY) or an animal who has decided that his area looked like a nice place to end it all (I can see where that might happen).

This ongoing preoccupation with the odor had the boss asking EVERYONE (on more than one occasion), if they could smell something in his office.  I don't know what he expected this insane questioning to do to rectify the smell; maybe if questioned enough, the smell would just go away.

Mike was out on a sales call for the morning and was fortunate, in that he had missed "smell-gate".  When he arrived back to the office, he heard "The Boss" talking about the smell to Adam in the warehouse.  Mike made the mistake of casually asking "what smell", to which "The Boss" snottily replied "your color blind, you won't be able to smell it".  I swear on my life that this was the exchange!!   Mike just shook his head and walked away.

I guess the smell in his office was emitting a red glow (isn't red the color that people suffering from color blindness cannot see?)
Posted by Observations from the Nut House at 10:48 AM