Meeting of the "Characters"

The "crew" at this organization is quite an interesting menagerie to say the least.  The warehouse has two employees and the office has three employees (this includes "the Boss").

We'll start with the warehouse; the warehouse manager is a large man approximately 40 years old.  In my short conversation with "Adam", I discover that he still lives at home with his parents and he is working for "fun".  Now he is not independently wealthy, but rather he just needs to work to support his pizza and beer habit.  Did I mention that the warehouse manager seems lazy and sloppy; this is just the type of person you need in a position of warehouse manager!

The second warehouse employee is named Alex, he is approximately 45 years old and seems like a great guy.  He is quiet, minds his business and is always working on something.  He is very attentive to detail and spends a large portion of the day picking up after the sloppy warehouse manager.

The office staff consists three people; one is "the Boss", the second is a man named Mike, he is approximately 45 years and I quickly discover he is a born again Christian.  Not that there is anything wrong with the religious beliefs of an individual, but I just am just a bit uncomfortable having it brought up to me so quickly after meeting someone.  I quickly learn from "this open book" that he was a wild child during his younger years and is now trying to make up for it.  I think he trying to convince me to join his "team"

The third employee is a woman named Rachel.  Rachel is 30 something and is a bit overly friendly.  You know the type, someone who speaks and sugar spills from their mouths.  She seems very nice, but after a few moments of speaking with her I feel like I have a sugar high and I cannot get away quick enough.  She is not a large woman, but she has a tendency to wear her clothes a bit on the tight side, which is not the most flattering.

The Boss assures me he is working on hiring additional staff because business is going quite well.

After meeting this current group, I quickly have determined that this is going to be quite an interesting month!

*All names have been changed to protect the insane 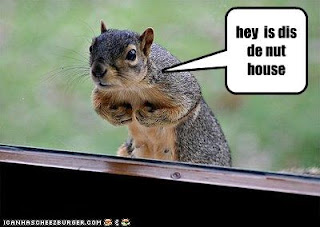 Posted by Observations from the Nut House at 5:40 PM