The Tree Trimming Went As Well As You Would Expect 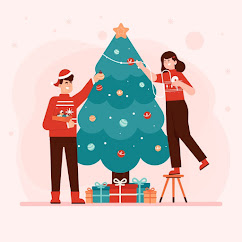 .
Today is the day before Thanksgiving; I hope you are all ready to wear your stretch pants, watch football and eat waaayy too much tomorrow.  We have a shortened day at The Nuthouse today - we are closing early to begin our Turkey Day festivities.  That being said, The Boss decided that in order to leave early we need to first decorate the Christmas tree that he brought in from his home yesterday morning (click here for recap).  As you might remember, I am a bit of a Grinch this year and I can comfortably say today's group tree trimming did little to help make that any better.

This morning started off with the arrival to The Nuthouse.  I decided to bring donuts for everyone, so we could begin the overeating process for the long weekend.  When we arrived, the pile of decorations The Boss deposited in the middle of the floor yesterday were still there waiting for us.  As the Grinch of the group, I felt the pile of decorations was mocking me, but everyone else seemed to be excited about the tree trimming.  I think it may have been the extra sugar from the donuts, but I could be wrong.

Once we finished our donut snacks, The Boss decided it was time to begin the tree trimming.  This is when the fun really began (insert sarcasm here)!  The Boss decided that first we should take everything out of the bags and boxes and review the materials we had.  More than one employee mentioned that maybe we should set up the tree first because we would need the extra room and then access the remainder of the decorations.  The Boss wasn't having it - he wanted all materials out of the bags and strewn across the floor. I swear, it's like working with a five-year-old child.

So, the tree assembly began and it went as smoothly as any other process in The Nuthouse.  We had people who wanted to be in charge (The Boss, Drew and Mike), people who just went with the crowd (Rachael, Alex and Wayne) and those who didn't care and just wanted to leave early (Adam and I).  Once the tree was up, then the lights had to be strung and the next world defining question was asked....do we start at the bottom or at the top?  I swear, this discussion lasted fifteen fricken minutes!  Finally, those insane individuals (who will remain nameless) that were arguing finally gave up and did what The Boss wanted.  I so wanted to scream..."WHO CARES WHERE LIGHTS START, STRING THOSE F*CKERS SO WE CAN GO HOME!"

Next were the ornaments, two of which Wayne dropped and broke...oh, Wayne - you never fail to disappoint!  By 3 PM the tree was finished and it actually looked nice considering the motley crew that put it together.  By 3:30 PM I was out the door to begin my long Turkey Day weekend!  I guess I am proud to say that I survived The Nuthouse tree trimming event!

Enjoy your holiday Nutties and don't eat too much!  See you next week!

PS - I almost forgot - Mike made sure to comment that since Christmas is to celebrate the birth of Christ, he would bring in some religious ornaments on Monday to add to the tree since we currently didn't have any.  Thank goodness for Mike (insert sarcasm here)!