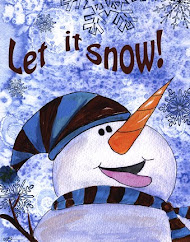 Good day Nutties and for those of you on in the eastern part of the United States, welcome to Snowmageddon!  It took a while for the snow to start where I am, so much so, that I thought that maybe - just maybe, they had predicted incorrectly.  By the time I went to be last night, a few light flurries had started to come down, but it still didn't look like it was going to amount to anything substantial.

Fast forward to my alarm going off this morning.  There is a frickin shitload of snow out there and it continues to fall!  When I woke up, I found Milo sitting on his cat condo watching the snow fall and blow around outside.  He is an inside cat and I'm sure he is quite pleased of that fact this morning. It is not safe for beast or beauty out there!  There is so much snow out there, that I think I may be higher than poor Milo.  Now, Cooper is another story entirely, once that crazy dog realized it was/had snowed outside, you would have thought his bladder was about to EXPLODE!  He was so preoccupied with going outside, he didn't even want his morning treats.  This boy LOVES the snow!

I bundled up in my ski clothes and brought Cooper out (I couldn't take the whining any longer); he was soooo happy and was so adorable jumping around in all the snow.  I watched him for a good fifteen minutes as he raced around, jumping, rolling and attempting to catch snowflakes in his mouth.  Clearly, I have a dog that is a BIG fan of the white stuff.  Me, not so much, but I do have to admit watching him have so much fun was a great way to start the morning.

My morning continued to improve.  As I was trying to stay warm while Cooper played, my cell phone rang and I was curious to see that it was The Boss.  When I picked up, he first apologized for phoning so early, but he wanted to catch me before I started getting ready for work.  He reported that the snow plow guy had not shown up yet and his car was already stuck in his attempt to turn into our parking lot.  I questioned where the snow plow (his friend...remember) could be and he ignored my question (click here for recap).  He said he will keep me posted on the status of the plow guy (why?), but in the meantime, I should stay home and enjoy the day.

I cannot say the change in plans broke my heart; especially considering that I was thinking of calling in today.  I'm not sure if I am going to have much of a relaxing day now that Cooper knows there is snow outside, but any day with Cooper (and Milo) is better than a day in The Nuthouse!  I guess the question will be when will The Boss' friend show up to plow us (and him) out?  I don't want to say I told you so, but I told you this was going to be a disaster if we had any sort of significate snow accumulations.

Enjoy the day if you are staying home and stay off the roads if you can!