Did You Survive December 25th? 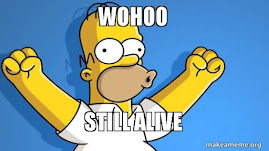 Hello Nutties!  I know I said that I would probably check in during our extra-long holiday break and I am surprised as you that I am writing so soon.  Needless to say, the insanity knows not the date nor the fact that I am on vacation, so I will jump right in.
Christmas day in the Northeast did not see "normal" December temperatures.  It was over 60 degrees and we had rain - a great deal of rain.  Remember how we had snow - a great deal of snow not so long ago? (click here for recap).  Well, that snow is now gone and has been replaced with standing water and mud.
The above weather factoid brings me to my first instance of insanity that I have encountered since starting my holiday break.  On Christmas morning (yes, Christmas morning), I received an email (I guess I should thank my lucky stars that it wasn't a phone call) from The Boss.  He was writing to tell me we had received a great deal of rain and the pond on our property had overtaken its banks.  The following things were uttered by me (out loud) while I read this email.  Number one - no shit Sherlock, I heard it rain all night too.  Number two - why the hell were you at The Nuthouse on Christmas day?  Number Three - why the frick do I care that the pond has filled up and overtaken its banks.  Why, why, why does he feel the need to tell me everything?  I took a deep breath and responded to his email (it was Christmas and I was being nice) and said that I would be stopping by the office next week and I am sure the pond will have receded back to its normal banks by then.
I spoke to my parents via Facetime on Christmas and they are doing well and remain COVID free.  It was a fairly normal conversation and everyone was fully clothed (click here for recap) - it was a Christmas miracle! They too had warm weather and couldn't believe that our temperatures were so high for Christmas day.  We caught up with the news around their town - increasing COVID numbers, people who were having large gatherings for the holiday and my Mom's latest trip to the casino (news flash - she lost again).  It's nice to talk to them even about trivial things and I miss having them around for the holidays!
That brings us to my trip to The Nuthouse today.  When I arrived today, it was at the same time as the mailman.  Now, I haven't discussed it, but our mailman is not the most personable person in the world.  I thought maybe it was due to the holiday and being so busy, but I am beginning to think he is just a cantankerous bitch all the time.  As the mailman exited his vehicle, I said hello and asked what he was doing here.  He ignored my question, proceeded to huff at me and hand me a huge pile of mail.  I was confused, but thanked him for the mail and reminded him that we are closed until January 4th.  He looks at me and sarcastically says that it would have been nice to have been told this information because he has been coming here each day and no one is available to take the mail.  I reminded him that we discussed our closure on December 23 and December 24 when he delivered.  The angry look he gave me could have stopped a train - he then said that I never told him we were closing.  Clearly, I am surrounded by incompetence (I told him not once, but TWO DAYS IN A ROW).  Now remember, you never want to piss off a postal carrier - they don't call it going postal for nothing!  Instead, I just smiled and sweetly, but with a bit of sarcasm, said that he was right, I probably didn't tell him on Wednesday or Thursday when he delivered, but luckily now he is aware.  Then I wished him a Happy New Year and skipped up the walkway to the front door.  I swear, I think I heard him talking to himself as he was heading back to his mail truck.  I better make sure I am not around in case he comes back.
As I balanced the leaning tower of Pisa sized pile of mail I received, I checked out the pond.  It might be more accurate to say, I looked at it from the walkway considering it was so muddy with all of the rain.  From my vantage point it looked fine and had not overtaken the building or parking lot - so no worries there.  I entered the building and said my hello to our mascot and gave him some fish food.  I also turned off many of the lights that The Boss must have left on during his Christmas day visit.  I opened the door to the warehouse and turned off that light too.  At least The Boss learned his lesson about walking around the warehouse in the dark (click here for recap) - now, we just have to make sure he turns off the lights when he is finished.
Well, I'm going back to my vacation with my two furry boys.  As you can imagine, Cooper is loving having me home; Milo not as much!  Hopefully our next interaction will be on January 4th.  Happy New Year everyone!
Posted by Nutty Wone at 11:45 AM