Monday Mornings Can Be Weird! 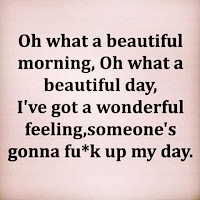 Welcome to new week at The Nuthouse!  This past weekend was WONDERFUL - I did absolutely nothing and I don't even feel guilty about it!  On Sunday, I took two naps before dinner time and still was able to sleep through the night.  Clearly, I am channeling my inner cat, because even Milo thought I was sleeping too much; he can be so judgmental!

It continues to be a scorcher here on the east coast.  Between the high temperatures and the even higher humidity levels,  it is virtually impossible to be outside for more than a couple of minutes without being completely miserable.  Maybe that is another reason why I stayed locked in my cave all weekend - the air conditioner and I became great and powerful friends this past weekend.  I think I may love Breezy (yes, I named my air conditioner!) even more than Cooper and Milo - just don't tell them.

When I arrived today, there was one car in the parking lot and it was a car that I did not recognize.  I'm not often first in the office (The Boss says he is usually in by 6AM - yeah, right), so I was even more surprised as I was parking someone emerged from the unknown, parked car.  It ended up being John, the guy that The Boss has been speaking with about being the draftsman/technical representative for the company.  I thought it was strange that The Boss hadn't said anything on Friday about him coming in, but he may have forgotten to mention it.

As I was getting out of my car, John came over and introduced himself and mentioned that we had met last week.  I said of course, I remembered him and apologized for The Boss not being in the office yet.  I mentioned that he must be running a little late for their meeting and I hoped he hadn't been waiting too long.  That's when John said, they didn't have a meeting scheduled - he just wanted to stop by to say hello.  I wish I had a mirror and could have seen my face as my mind comprehended what he had just said.  WTH - you are waiting in the parking lot of a potential employer on a Monday morning just to say hello??  I had initially thought he was a strange bird when I met him last week - clearly my weirdo meter is running at peak efficiency!  I think this guy my just be too weird for this place - I know, I never thought I would ever say those words in relation to The Nuthouse.

The Boss showed up about 15 minutes later and looked extremely confused when he came in the office and saw John sitting there speaking with me.  John then said he was in the area (yeah, down a dirt covered, pot hole filled road in the middle of nowhere) and just wanted to stop in and say hello.  He spoke with The Boss about his weekend and a few other basic topic things and next thing I know he was saying goodbye and was gone.  As he drove away, The Boss and I looked at each other and he said "that was weird' and he just turned and went into his office.  I knew right then that this f'n weirdo was going to be employed here sooner rather than later.   After the others arrived, I told them the story of John being here before the office was open and they think he maybe a bit weird too.

Never a dull day in The Nuthouse!  Keep cool Nutties - until next time!
Posted by Nutty Wone at 4:37 PM