Wow, I Am Happy It's Friday! 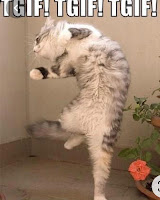 This picture expresses my excitement perfectly; it is Friday and I could not be happier!  I have no specific plans for this weekend and I am looking forward to doing nothing.... nothing at all!

Yesterday, I met with the Fire Marshal from the town.  He was scheduled to re-check the list of items he had previously found that were against town code.  They were easy (and inexpensive) fixes and he was pleased they had all been addressed and corrected to his satisfaction.  He was very friendly during his visit  - I'm really not sure why The Boss seems so intimidated by him.  The Marshal was only at the office for a short time and about an hour after the scheduled appointment time, The Boss arrived.  I was surprised to see him, after all, I had to meet with the Marshal because he said he was  "going to be out of the office all day."

In case you were wondering, the kitchen sink drain continues to be running slowly (click here for sink story), so, this afternoon, The Boss brought in some tools and made a big production about placing them around the area of the sink.  Now, I knew exactly what he was doing (he is so fricken transparent); he was banking on the fact that if he put tools around and made it look like he was doing something, Drew would come over and ask if he needed help (because everyone knows he does).  I didn't say anything about my hypothesis and it only took Drew about five minutes to fall into The Boss' trap (non pun intended).

When Drew asked The Boss if he needed help, I could almost see the relief on his face!  He actually said, in his most manly voice, "my plan is to tackle this sink problem, but I cannot get to it right now".  Simple, simple, easily fooled, Drew - he fell for his trick hook, line and sinker.  Next thing I know, The Boss is in his office on the computer, never to be seen again and Drew is elbow deep in the sink and removing coffee grounds from the pipes.  Drew, you sucker, he got you good!  Drew successfully fixed the sink and water is flowing smoothly again!  Surprisingly enough, a few minutes after the sink was done (and Drew finished cleaning up), The Boss emerged from his office and indicated he was ready to fix the sink.  He then acted all surprised that it was already done.  And the Academy Award for Best Actor goes to....The Boss!

It was really quiet this afternoon, so I decided to leave a little early.  I wanted to start my weekend of doing nothing as soon as I could.  It takes a great deal of work to make doing nothing look so easy - and I'm just the man for the task.

Enjoy your weekend Nutties - see you Monday!
Posted by Nutty Wone at 8:05 PM