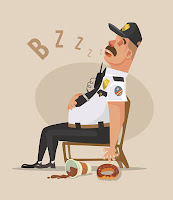 Here at The Nuthouse, we like to fly "under the radar."  When I first arrived to begin my temporary position, I could immediately tell this place was different in oh so many ways (click here for my arrival story).  Remember, even when we moved to the Hobbes Street location, The Boss had to be pressured by the Fire Marshal to add the street number to the building - and don't even suggest that we put a sign up with our company name.  That crazy idea will make The Boss' head spin like a top.  I am not sure why we are so secretive, but his paranoia seems to be increasing.  Maybe he is in the witness protection program and we just don't know it?

Someone from a local security company visited today to discuss adding cameras, motion detectors and entry gates to the outside of the building.  As I have said numerous times, we are located down a dirt road, filled with potholes.  The area resembles a deep and dark "woods setting" found in a bad horror movie.  I cannot imagine what or whom The Boss hopes to "catch" with motion detectors and security cameras in a desolate area like this.  Maybe a deer or possibly is it to keep a better eye on those pesky geese that are continually out to get him (click here for the geese story)?

Once the security company representative left the building, The Boss was very excited to speak to everyone about what the company could offer.  When we questioned why we he thought we needed such extreme security measures for a small company at the end of a dirt road, The Boss said this morning a car drove into the parking lot and turned around (gasp!).   He attempted to run out to see who it was, but they were driving away before he could get to them.  From that brief interaction, he immediately surmised that the individual in the car was not an innocent, lost driver, but rather a unscrupulous, troublemaker looking for information on our company, products and employees (yes, he was deadly serious when he was telling us this).  My god, this man really is INSANE - someone just turned around in a parking lot for god sake!

He also commented that he wants security amped up inside the building.  We all have a responsibility to make sure that windows are closed, doors are locked and important files are not out in the open.  At that point, he reminded me that I had not been locking my filing cabinet consistently each night.  I admit, he is correct in that statement.   I apologized and said I would make sure that I am more mindful of doing that each evening prior to my departure.  I did want to ask what should I do about the previous years' files that are sitting in banker boxes, (out in the open) to the left of my locked file cabinet, but I'm sure those don't need any additional security.

The Boss said he will be making a final decision on which security measures will be added to the building as well as the outside area in the next week.  You cannot fool me twice; I know from prior experience that a decision will not be made in the next week.  If I were a betting kind of guy, I would guess that nothing will ever happen with increased security and rest assured, my previous years files will remain unsecured next to my locked file cabinet.