The Boss vs. The Office Thermostat 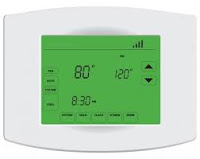 Stories are told about offices across the country where employees disagree about what the optimal temperature should be.  Some people are inherently cold and would like the office to be a bit warmer; then you have those individuals who think a meat locker should be a bit cooler.  Fortunately for us, we do not have that problem in our office; everyone seems to agree on the same ambient temperature. This is where our story begins....

We all know how a thermostat works - you set it to a desired temperature and in the case of summer, the air conditioner will run until that programmed temperature is achieved.  For some unknown reason, I'm not sure The Boss has totally grasped this simple concept.  Our area of the country has been hot and humid recently - welcome to July!  The Boss has programmed the thermostat in our office to be 80 degrees during working hours and during non-working hours (and weekends), the temperature rises to 90 degrees (he is trying to save $).  Up until recently, the air conditioner has not had to run very often, but now with the heat and humidity, it is a necessity.

The Boss was already in the office when I arrived this morning and I noticed he looked annoyed.  I also noticed as soon as I entered the door that it was hotter than hell in the office.  I said good morning, put my Coca-Cola in the fridge and asked what was going on with the air conditioning.  He said that he worked late last night and turned it off at around 6 PM and must have forgotten to turn it back on.  WTH???  I mentioned that I thought the temperature setting changed to 90 degrees beginning at 5 PM.  His response was one for the record books.  He said, at 6 PM it was still 82 degrees; he thought it wasn't working correctly, so he must have turned it off.  I commented that since it was 82 degrees, the air conditioner was working correctly for the evening setting.  Did he think the temperature shot up to 90 degrees at 5:01 PM?  He then said his famous line when he doesn't like what you are saying, "I don't need an editorial."  Yup, right there it was crystal clear - The Boss didn't know how a programmable thermostat worked!

Throughout the day, he would constantly come out of his office to check the office temperature.  He would then sigh loudly and return to this desk.  Now remember, the air had some catching up to do because it was off all night.  Each time he came out and saw it hadn't reached the programmed 80 degrees he would manually override the programmed info and hit the temperature down button.  He must have done this a dozen times!  He actually thought by lowering the temperature it was going to make the area cool off quicker!  Yup, I was shaking my head too.

By lunchtime, the air conditioner was still playing catch up and we had achieved a temperature of 83 degrees in the office (almost there!), but this latest information check just set The Boss off completely.  He actually had a temper tantrum in front of the thermostat; he stomped his feet and then ripped the cover completely off  the thermostat.  It flew across the room and bounced off the opposite wall.  Yup, that will definitely help the area cool down faster!   I'm beginning to think we may need a "time out" area in the office for certain individuals.

As the day drew to a close, the temperature finally reached the 80 degree mark.  As we were leaving for the day, The Boss came out of his office holding a piece of paper and some tape.  He walked over to the thermostat and began taping the piece of paper to the wall.  What did the paper say, you ask?

EFFECTIVE IMMEDIATELY
PLEASE DO NOT TURN OFF OR TOUCH THERMOSTAT!

Now, that is RICH!  I laughed out loud, walked to my car and headed for home.  Is it Friday yet?
Posted by Nutty Wone at 4:32 PM