Do You Know Why The Kitchen Sink Is Running Slow? 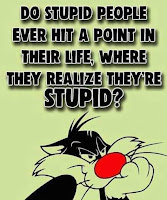 Allow me to take you back in time - to about a month ago when I was pouring the last few sips from a bottle of Coca Cola down the kitchen sink and noticed that the drain seemed to be running a bit slow.  I didn't see any debris or any other blockage in the sink to cause this issue, so I mentioned it to The Boss.  He indicated that he hadn't noticed the drain running slow, but would keep an eye on it.

Fast forward a couple of weeks - others in the office have commented to me that they thought the drain was running slower than usual.  I told them I had informed The Boss, but I would mention it to him again.  Maybe I should save ourselves the pain of witnessing him attempt to pull the drain apart and just call a plumber myself - but what fun would that be?  I mentioned it again, but it seemed to fall on deaf ears.

Fast forward again to this morning, the morning after a long, holiday weekend.  The Boss arrived before anyone else and he had made the coffee (click here to read the coffee making process).  By 11 AM,  The Boss went in to get another cup and the pot was pretty much gone.  When he saw it was almost empty he took a quick poll wondering if he should make another pot (he asked everyone) and it was decided that another pot would be consumed by the end of the day.  This is where the reason for the slow running drain problem quickly became crystal clear.

I witnessed this with my own peepers.  He took the coffee pot apart and proceeded to dump the coffee grounds, not in the garbage like a normal person, but down the kitchen sink drain!  He then turned on the faucet and made sure every ground made in down that drain.  As I am watching him do this, I am flabbergasted at what I am seeing; who in their right mind dumps coffee grounds down the drain when the garbage can in right there?  No wonder the sink is running slow - the drain is chock full of coffee grounds.  Damn, the plumber is going to love this (if and when he ever calls one).

It was after watching this display that I mentioned the slow running drain once again to him - maybe this time he would listen and act accordingly.  As he is filling the carafe and standing at a distance to see if it has the perfect amount of water, I say, "hey, did you see how slowly that drain is running?"  When I tell you his response, you are going to think I am lying, but I swear I am not.  He said, " I did notice it this morning, but I cannot imagine what could be causing it."  He then said that maybe he would take it apart later this week and check it out.  Oh, goody...there is going to be a water show at The Nuthouse later in the week.  Tickets are on sale now!

Yup, as the meme for this post suggests - stupid does not realize stupid!
Posted by Nutty Wone at 4:55 PM