Guess Who Made It In Today? 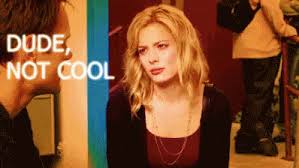 Yesterday was going to be the first day for our new draft person/technical representative John; but guess what.....he called in sick!  No, I misspoke when I said that, he didn't actually call in for his first day of work.  He didn't show up at all and we had to call him, at which time he said he was ill and would not be in.  I couldn't make this shit up if I tried!

The Nuthouse opens at 8 AM and by 8:30 AM The Boss was becoming concerned that John hadn't arrived and that no one had heard anything from him.  I inquired if he knew what time we started and The Boss assured me that he had discussed it with him on Friday when he came in to sign his employment papers.  By 9 AM, The Boss decided to phone him and after about six rings, John picked up the phone.  Now, I don't think John had put The Nuthouse number in his contact list, because when he initially answered, he sounded chipper, but once The Boss identified himself, John immediately sounded a bit under the weather.  He told The Boss that he was sick and wouldn't be able to make it; he then said goodbye and hung up.  To say The Boss was pissed was an understatement - it was hilarious!

Fast forward to today.  No one knew if John would be coming in or not.  No one knew, if he wasn't planning on attending the festivities, if he would call in or not.  So many questions....  At 7:55 AM we had our answers; bounding up the walkway like a dumb labrador retriever was our newest Nuthouse employee, John.  He came in said good morning and asked where he was sitting.  He did not mention a word about yesterday and he looked pretty healthy too.

The Boss came out to meet him and asked how he was feeling and John replied, "great."  This just added to the anger from yesterday.... again, hilarious.  The Boss took John out to the warehouse where he would be stationed and must have told him if he needed anything special to let me know and I would make sure we ordered it for him because before The Boss had made it back to his office my intercom was ringing and it was John.

Now, mind you, I had put paper, pens, paperclips, phone manual, computer passwords, etc. on the middle of his desk yesterday in preparation for his first day.  I had planned on sitting with him after he settled in to get him up and running.  He was not looking for anything like that, he was wondering if there was another desk chair around because the one currently at the desk hurt his back.  How could this ass-hat even know that his chair hurt his back - he has only been here ten minutes!  I swear, this weirdo is going to go down as the worst hire in the world!

I am reluctant to say that John may be more annoying than The Boss, but I am beginning to wonder if it is true.  God help us all - hasn't 2020 been bad enough already?
Posted by Nutty Wone at 4:45 PM