So Many Smells, So Little Time.. 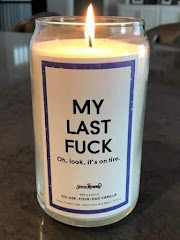 I guess you could say that today was a very fragrant day at The Nuthouse!  When I arrived this morning, I proceeded through the door and was face to face with quite a pungent odor.  My first thought was that someone had left their trash from lunch in the kitchen garbage and it was stinking up the place.  I investigated and the kitchen garbage can was clean and empty.  I continued my search, but was unable to find the source of the smell.

Needless to say, I wasn't the only person who was bothered by the smell.  As each subsequent employee arrived, the first thing out of their mouth was, "what the hell is that smell".  They too put on their detective hats in an attempt to find the source of the stench.  They too were unsuccessful!  Once The Boss arrived, the drama surrounding the smell was ratcheted up substantially.  He wanted to know what the smell was.  Where was it coming from?  Did anyone else smell it?  Did we all check our garbage? He was running around like a madman, bitching and looking for the origin of the smell  By 11 AM, I told Drew that if I heard The Boss utter the word "smell" one more time, I was going to go postal.  I reminded him that this place insane and no court in the land would convict me!

Drew and Mike came to the conclusion that something must have gotten in the building, or maybe trapped inside the walls and perished.  That is what we are smelling - the stench of death!  It is a plausible hypothesis since it is getting colder here and all of the wildlife milling about might be looking for a warmer home for the winter.  Great, this place is not only slowing killing me, but now has set its sights on innocent wildlife.  When will the insanity end?

Lunch time finally arrived and I couldn't wait to get out of our smelly, insane, death asylum.  I decided the best thing for me to would be to stop at the mall and pick up a scented candle.  I stopped at the local Yankee Candle and reviewed my choices.  I didn't want anything that resembled a food smell - food and dead animal...not at all pleasing.  I also considered the abundance of fall scented choices available - no...pumpkin spice scented dead animal also did not sound appealing.  If finally decided on something much more generic called, Clean Cotton.

When I arrived back in the office, I showed my co-workers my purchase and I immediately became the Nuthouse hero!  Since we all are stationed in the same area, they too would benefit from my fragrant afternoon purchase.  We quickly found a central location for it and lit that bitch up.  After about one hour, the room smelled like clean cotton with a hint of dead animal.  Not perfect, but much better than it had been earlier in the day.

Of course, The Boss had something to say about the purchase.  He didn't really like the smell (I guess dead woodchuck is better).  He thought an open flame in the office was dangerous (it wasn't a bonfire, Dude, just a candle).  As the day went on, his tune changed a bit.  He asked where I got the candle and wondered if he should pick one up for his office.  My god, this man drives me NUTS.

On a side note, the picture I attached to this positing was not available at my local Yankee Candle establishment (yes, I asked).  If anyone has an idea of where I could find one, please let me know - I have the perfect spot picked out for it.