The Boss Is NOT a Good Neighbor! 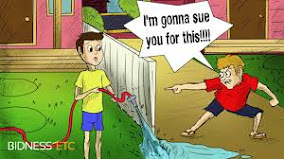 Just when I thought The Boss can't get any worse, he really steps up and surprises me yet again!  Let me give you a bit of background info.  When we moved to the Hobbes Street property, The Boss told us that we were located in a "protected" area of our county.  At the time (and right now too), I'm not really sure what that means, but today I discovered "protected" means that if he doesn't appreciate what the neighbor across our small pond is doing, you have the right to call the police and report them.

We have a neighbor across the pond (yes, it's an actual pond - I'm not referring to England) that has some sort of business.  I don't know what they do, and I actually don't really care - and it's not pertinent to the story.  Well, this neighbor has started some sort of expansion project.  It is difficult to see exactly what is going on because all the leaves are on the trees, but we can hear them working.  Over the past couple of weeks, The Boss has become strangely preoccupied with the work going on over there.  He has "stopped in" twice and has said he drives there over the weekend (when they are closed) to check out what is going on.  Maybe we should start referring to The Boss as "John" because he is a bit stalker-ish!

We knew it was bound to happen at some point; today The Boss came in with a total fire in his pants about the neighbor and his expansion.  He complained three times before lunch that he couldn't concentrate or get any work done because of "all the noise" (sure, that is why he cannot get any work done).  He then proceeded to go outside numerous times, standing on the edge of the pond trying to determine what was going on with the neighbor.  As I mentioned he couldn't see much because of the full foliage on the trees.  By 3 PM, I guess he couldn't take it anymore!  He started roaming around the office and warehouse bitching about the noise and the fact that the land is "protected."  His constant  bitching worked himself into such a tizzy that he ended up phoning the police.  Yup, he actually phoned the police because the neighbor was working outside!  I heard him on the phone (I did not hear what the police said) stating on more than one occasion that they should come and investigate because the land is "protected."  Lord help us, now the police department knows we are The Nuthouse.

Around 4:30 PM in drives a police cruiser.  An officer walks into the office and requests to speak with The Boss.  The Boss comes running out of his office like a kid on Christmas morning.  He leads the officer outside to the pond edge and I see a lot of finger pointing being done by The Boss.  The Boss returns to the office alone and he seems quite pleased with himself.  Drew asked him what was going on and The Boss proudly reported that the officer was going over to the neighbors to have a talk with him.

As if it wasn't enough that have weirdo John to worry about (yes, The Boss is still worried about him), but now The Boss has pissed off the neighbor.  We are gaining quite a reputation around here!  Good times....good times!