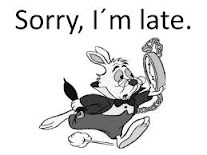 You know what they say about good intentions! Well, I had all intentions of letting you in on how our week ended at The Nuthouse sans The Boss, but my messed up life somehow got in the way.  Let us use the "way back" machine to take you back to my post on Wednesday.  Remember...we had a great day - The Boss didn't call and the world was spinning perfectly!
Fast forward to Thursday; The Boss had clearly broken free from his captor (his wife) and called us seven...yes, seven times!  After call number one (first thing in the morning, might I add), all subsequent calls were for ridiculous reasons.  Sometimes I think he just phones to see at what point he drives us to the brink of insanity. By days end, we were all done with Thursday and looking forward to having another Boss free day on Friday.  You know what they say about being careful what you wish for....
When I arrived on Friday morning, I thought I was first in the office, but I was wrong.  I walked in and what did my unbelieving eyes see.....The Boss, sitting in his office.  I really thought (hoped) I was seeing things and at the same time felt so defeated I thought I was going to weep.  Why would he come in on a Friday?  Why does he hate us so much?  Did his wife get as annoyed with him as we do and cut their vacation short?  Is he going to be here all day? Why, why, why?
When I inquired if everything was okay and wondered why he was back from his vacation early, he said it was always his plan to come in on Friday and then he inferred that he had told me this information prior to his departure.  Nooooo, he never said he was coming back early, much less coming in on Friday - I clearly would remember news like that!  It was so sad; as each Nuthouse employee arrived for work, I watched the realization of The Boss' presence register on their faces.  Some of them looked even closer to tears then I was.  As you can imagine, the rest of the day was annoying, long and tedious.  Add that to the fact that we all were still quite shell shocked by his attendance.
As if my Friday couldn't get any shittier, on my way home I stopped at Lowes to pick up a battery operated leaf blower for my small yard.  I ordered it online during lunch and choose curbside pickup.  Cooper has a habit of eating tree debris on the ground and I thought this purchase might help stop him from consuming and regurgitating said debris on my rug.  Lowes is about half an hour from my home, but only a short jaunt from work, so I picked up my purchase on the way home.  I also stopped at the grocery store, the drug store  and picked up pizza for dinner. I arrived home a little after 8 PM with my haul.  I ate some pizza and then decided to open the blower up so I could use it first thing in the morning.
Here is where the day gets even shittier - you didn't think that was possible - did you?  To be honest, I didn't think it could it either, but clearly I was wrong.  I broke open the box that was put in my trunk at curbside pickup and the fricken box was empty.  Well, it wasn't exactly empty - it contained the battery and the charger..just no actual blower.  I too am now questioning what have I done in a past life to deserve this today?  I also realize that Lowes is now closed, so I cannot call them.  I also discover that I am out of beer and I could really use a beer right now.  I decided to eat some more pizza and go to bed - maybe if I sleep the shittiness of the day will stop piling up.
First thing Saturday morning, instead of blowing the yard clean, I am in my car traveling to Lowes to find out where the hell my blower is.  When I arrive, of course, the return line is out the door.  I finally get to the front of the line and tell the girl my story and she looks at the box and dumbly (like it was my fault) says "of course there is no blower in there, this box says display".  I then kindly tell her that maybe she should inform her product pickers to not choose the display box when picking items for curbside pickup.  Maybe, on second thought, the empty display box shouldn't even be with the boxes that customers might purchase.  She looks at me like I have spoken to her in Klingon, turns around and walks away.  Now, I know I am going to sound like an 80 year old man when I say this, but I am very concerned for the future of our planet.  These young people (not all, but most) are USELESS!  After waiting in line and talking to the most helpful customer service representative (yes, that is sarcasm).  I wasted over one hour, but was leaving the store with all three components of my purchase (yippee).
I arrived back home and cleaned up the yard for Cooper.  Yes, he still was able to find crap to eat, but not nearly as much as he usually does and no one threw up on any rugs.  There might be hope for this long weekend yet.
Enjoy your Labor Day Nutties!
Posted by Nutty Wone at 2:20 PM