How Fitting...A Shitty End To a Shitty Week! 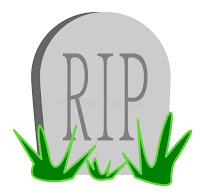 As if this short week couldn't get any longer or shittier; I arrived this morning to find Frick floating belly up in his tank (click here for a Frick and Frack story).  I am well aware that fish don't live forever, but I have the sneaking suspicion that The Boss might have had something to do with Frick's, earlier than expected, demise (click here for story).  Of course, I cannot prove anything, but I hope he realizes I am keeping my eye on Frack - keep away from my fish you crazy bastard!  Even my co-workers were sad about our mascot - these two crazy fish were sadly, the most normal things in The Nuthouse.  Next week can only be better....right?
Update on The Boss' drawing - it is still MIA!  Yes, I am laughing on the inside about it - I know, I am an awful person.  The Boss called John into his office for a "quick talk" today.  I am not exactly sure what was said, but if I were a betting man I would say it was concerning the turnaround times on requested drawings.  The conversation became a bit heated (on John's end) and it seemed that John didn't quite appreciate the topic of the The Boss' talk.  He stormed out of not only The Boss' office, but also the building and we didn't see him again for the rest of the day (oh, darn).  The Boss didn't have much to say about it when people asked but at the same time, he didn't seem too concerned.  It will be interesting to see how this plays out.  You know my thoughts on that weirdo!
I am happy to say that this short week is finally over.  I am looking forward to spending the weekend with my two furry boyz and attempting to recover from the longest short week ever!  Until next week Nutties!
RIP Frick - may you swim forever in crystal clear seas!
Posted by Nutty Wone at 4:11 PM