We Paid Dearly For Yesterday's Normalcy! 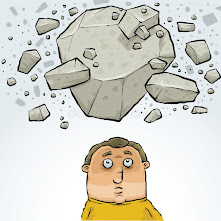 Welcome to another Tuesday at The Nuthouse!  Yesterday was a weird day; we were busier than usual for a Monday and nothing too strange or annoying occurred.  It would be what a normal worker, in a normal office would consider just a normal day.  As you know, we are not normal and today, we paid dearly for yesterday's normalcy.
Our morning started off like any other; The Boss was making coffee - today he only stepped back from the carafe twice (click here to read how coffee is made in The Nuthouse) and everyone else was busy taking care of their own workloads.  As the morning drags on, the front door opens and a man enters the office.  He caught my eye first and I asked if I could help him.  He introduced himself as Brian, said he owned the shop down the road and asked if The Boss was available.  It didn't register immediately, but within a split second, I realized this was our neighbor from across the pond.  I immediately concluded what he wanted to speak with The Boss about - the visit from the police last week (click here for a refresher on what happened last week).  The Boss was not in his office (he was on one of his many jaunts to the warehouse), so I said I would get him.  I called out to the warehouse and asked him to come into the office because he had a visitor.  No, I didn't say who it was - I know I am an awful person, I just wanted to see what happened.
The Boss traversed the parking lot and came in the front door and immediately was face-to-face with the neighbor he had reported to the police last week.  I have to admit, I almost felt bad for him when I saw the shock on his face when he saw Brian standing there.  He clearly knew who Brian was and stuttered a bit as he asked him to come into his office. I didn't hear what transpired between the two of them, but I could tell from the voice levels that Brian wasn't a very happy camper.  I did hear The Boss say "protected land" on more than one occasion, which I believe only angered Brian more. After about ten minutes, Brian left and The Boss had absolutely nothing to say about the visit.  He did tell the staff that if "that man visits again to say he is not in the office".  Hilarious!  What did he think would happen when you sent the police knocking at his door?  God, he is an idiot!
It took a while for The Boss to calm down from his "visit" with Brian.  In his defense, he REALLY doesn't do well with confrontation.  Around 1 PM he started acting more like himself; he was leaving his office again (and going into the warehouse) and making trips back and forth to the kitchen - all was back to "Nuthouse Normal".   Then the shit really hit the fan!
Around 3 PM the front door opens and you will never guess who walked in.   That's right - our ex-employee, John (click here to read how John became an ex-employee)!  Now, at the same time, The Boss was in the kitchen (which is directly near the front door) and once John started to speak, I actually watched The Boss retreat deeper into the kitchen - almost hiding.  We all said hello and I asked why he was here.  He quickly said he came to pick up his stuff (I wonder if he remembered he had printed out porno and was concerned we would find it).  I told him that his stuff was sent to him via UPS last week and he should have received it on Thursday.  He said he didn't receive it (I don't know if I believe that) and he was in the area (now, I definitely don't believe that).  He then asked if The Boss was around.  I thought for a split second to throw The Boss to the wolves and say he was in the kitchen, but something in me felt bad for the guy.  I didn't think he could handle two confrontations in one day, much less one from someone I think he was concerned might hurt him.  So, I was the bigger person and said The Boss was not currently in the office.  I offered to give him a message or suggested that he phone later today.  John didn't seem interested in either option and again said, he was just in the area and that it was nothing important.  He then said goodbye, turned around and left.
As we watched him driving off, The Boss emerged from the kitchen and he couldn't fake that he was hiding in there from John.  He laughed it off and thanked me for saying he wasn't in the office.  He also commented that we had to get some new candidates for that position because he thought that John might be sniffing around for his old job.  I immediately thought, there is no way in hell that weirdo is coming back to The Nuthouse!  I made a mental note to add it to my to-do-list for first thing tomorrow.
The moral of the story Nutties is to not take a "normal" day for granted; we did and see what happened!  Until next time - have a great night!
Posted by Nutty Wone at 5:26 PM