Well, I Cannot Un-See That! 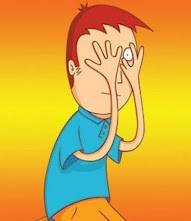 As you know, it's been a rip-roaring, strong smelling week here at The Nuthouse.  I am happy to report  the stench of death has diminished a bit as the week progressed.  The Boss must be getting tired of lighting and extinguishing all of the those votives each day (click here for recap), because I heard him mention yesterday to Adam that he will be coming in over the weekend to "air the building out".

On a positive note, I also heard that The Boss is not going to be in the office today.  This benefits us two-fold; one, he is not here (bonus) and two, he will not be holding a church service in his office with all those votive candles.  Today, our office will not smell of rotten death and apple pie!  Let us all rejoice!

We all were going about our day and enjoying the solitude of a Bossless Nuthouse when the unthinkable happened - the front door opened and he strolled through it.  To say that we were immediately shocked would be an understatement - not at his appearing at The Nuthouse, but rather, his actual appearance.  It pains me to even convey it to you because it helps the picture in my head (which I cannot erase) to become even clearer...people, I can not un-see the frightful spectacle I am about to communicate.

The Boss walked into the office in workout gear. Now, not workout gear like you and I would wear.  No, he came through the door looking like an older, plumper and bumpier version of Lance Armstrong.  Yup, it looks like he has taken up biking and his first purchase was a bright white, spandex ensemble, possibly a size too small; leaving nothing to the imagination, I might add.  To complete the look, he also donned a bike helmet - yes, he actually wore his bike helmet into the office.   The helmet was one of those aerodynamic jobbies that reminded me of a weird bird head.  I immediately wonder, did he put the helmet on when he exited his car or did he wear it while he was driving to The Nuthouse.  Now, I thought when I passed drivers on the highway wearing their masks it was weird; if I saw this nut job with a biking helmet on when driving, I would have crashed my car!

To say the staff in the front office was shocked at his gear would not be a strong enough sentiment.  Most of the employees just stared like they were going by a grotesque accident on the highway.  No one said a word, they just watched him flit around in his getup and make a phone call from his office.  He then came out into the main room, wished everyone a good weekend and was on his way.  After we watched him drive away, we all looked at each other in utter disbelief - did that really happen?  No one said anything for a few minutes and then Drew said, "I didn't know The Boss was Jewish".  Everyone paused a moment and Rachael started cracking up.  We all joined in and busted Drews' ass the rest of the because he even looked there.

My plans for the weekend, you ask? Just a scrub brush directly to my brain in an attempt to erase this entire day from my memory bank.    Shalom to you all!