We Couldn't Expect Two Days In A Row... 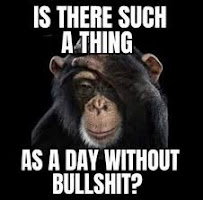 Yesterday, we reveled in the silence of The Nuthouse...The Boss decided to work from home.  He called in the morning and said his injuries were really bothering him and his wife thought it would be best if he stayed away from the office. Now, don't get me wrong, even without his physical presence in the office, he still drove us all nuts by phoning every hour and sometimes twice, but just not having him here was beyond wonderful!  We all thought that after a day working from home, he might realize it was easier for him and just stay there until he was able to get around in an more efficient manner.  Our dream didn't last long at all - he was back in the office bright and early this morning!
When I arrived, I saw his car in the parking lot and I actually said "f*uck me" out loud - a great way to start a Wednesday!  I made my way into the building and there he was attempting to make coffee with his wrapped knee and crutches from 1920.  He wasn't able to do his normal coffee making routine (click here for recap), so it actually wasn't as painful a process as it normally is.  The joy didn't last long; in the first twenty minutes I was in the office, he had gotten up from his desk and went somewhere three times....there was no doubt about it, today was going to suck!
Just when I thought it couldn't get any worse, in walks the contractor to cut the door in the conference room so we don't have to leave the building and go outside to enter the warehouse.  Don't get me wrong, I was pleased as punch that we were finally going to get that door.  I, for one, was sick and tired of having to go outside to bring materials to the warehouse.  It is getting quite cold on the east coast and donning a jacket just to go to the warehouse was getting old.  I knew that the arrival of the contactor (i.e. a person who didn't know about The Boss' injury) was going to cause The Boss to have to tell the injury story again (you know the one about the messy warehouse, not the true one about his walking around a working warehouse in the dark).  He was also going to have to discuss his diagnosis and his timetable for recovery.  Lastly, with work being done in the conference room, he would now have one additional place to visit on his jaunts during the day.  Lord, give me strength!
As expected, The Boss spent a lot a of time with the contractor and on more than one occasion his crutches became entangled in construction debris, supplies and/or tools.  I could tell just from the tone of the conversations, the contractor was getting quite annoyed by The Boss' presence.  Fast forward to lunch time - the contract left for lunch and never came back.  Wow, it's like this has happened before...(click here for recap).
By the close of day, The Boss seemed a bit drained from all his running about and decided he needed to leave a bit early.  I asked if he would be working from home tomorrow, he said he wished that he could, but he has much too much to do tomorrow and needs to be here. Lucky us!
Until tomorrow Nutties!
Posted by Nutty Wone at 4:39 PM