I Never Realized Coffee Could Be So Complex! 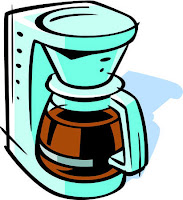 Today a new addition was added to the kitchen - a coffee maker donated by The Boss.  Many of the employees stop on the way to the office and pick up a daily cup of coffee.  God knows, without caffeine, this place might even be nuttier.   The Boss said his wife upgraded their machine at home and since he thought it might get some use here, he brought it in.  He also provided coffee, sugar and half and half.  I, myself do not drink coffee (I think it smells like ass); I prefer a good ole Coca Cola in the AM to get my motor running.  Hey, stop judging...it creates the same end result and it doesn't smell like ass!  All the coffee drinkers in the office were excited with the addition and couldn't wait to get their "java on".  The Boss offered to make the first pot and it was then that the insanity began!

As I said, I am not a coffee drinker, but I do have an idea of how to make coffee - water in the pot, coffee in the holder, click a button and viola ass smelling liquid.  As you have realized by now, The Boss makes every task he performs a bit more involved and difficult than it needs to be and true to form, making coffee was no exception.  First, he filled the pot from the sink in the kitchen.  I then watched as he put the water filled carafe on the counter and took approximately five big steps back from it.  He then crouched down level with the carafe and squinted.  After doing this, he went back in the kitchen and dumped a bit of water down the drain.  He then repeated the steps backing away and the crouching once again, then returning to the carafe.  This time he must have taken too much water out, because he proceeded to add additional water.  Hand to my heart when I tell you he did this song and dance two additional times!  Once he had determined he had the exactly perfect amount of water, he added it to the pot and proceeded to add the coffee grounds.  He flicked the on switch and the liquid started to brew.

Everyone in the sales office watched this display in complete and utter confusion, horror and morbid curiosity.  Immediately some questions came to mind - who makes coffee this way?  Was he possibly doing this just to mess with us?  Does he make coffee this way at home? And, if so, why hasn't his wife buried him in the basement yet?  The coffee drinkers reported that it tasted great - I think they are just happy to have coffee available the entire day.  I, on the other hand, am not looking forward to the coffee song and dance every time he makes a pot.  Maybe I will learn how much coffee is needed for a pot and just make it myself - for the sake of my quickly deteriorating sanity.