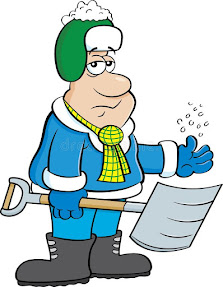 Welcome to my Tuesday in Hell, Nutties!  In my area of the country, we are under a snow advisory, which means the snowy, cold shit is coming, it's just a matter of when.  When I showed up for work today, I arrived prepared with warm clothes and snow boots.  I had a feeling that I was going to need them and gosh-darn it, I was right again. I think maybe I should get a lottery ticket.

As you may remember, our last snow storm was a complete cluster-fuck!  The Boss hired his "friend" to be our snowplow guy and guess what, his "friend" is a fricken' flake too (click here for recap).  For this storm, the snow didn't arrive overnight while we were tucked snug in our beds, but rather started in the early afternoon continued the whole day.  At some point during the afternoon, the shit was falling over an inch an hour and you could barely see across the parking lot.  Now, in the "normal" world, the snowplow guy would drop by and make a pass through the lot during the day assuring that it wasn't total chaos when we left at 5 PM.  Notice I said "normal" world;  did you forget where and who we are?

Around 3 PM, much to my shock and dismay, the snowplow guy appeared (I had bet Drew lunch that he wouldn't show up before we left - so lunch is on me tomorrow).  That being said, he didn't just make a quick pass through - he actually came into the office and announced his arrival, like he was the King of England or something.  When we all looked at him strangely, he then proclaimed that we should all come outside immediately and move our vehicles so he could plow!  That's right, he wanted us all to move our cars out to the road, so he could plow.  It then occurred to me, this fricken' guy has no intention of returning tonight to plow - this is going to be our only plow until he can "find his way" back here. If he was as efficient as he was during the last storm, we wouldn't see him again until Wednesday!

Then, the following was uttered by The Boss and it made me laugh out loud, "just give me the keys and I will move your cars for you".  Does this man think that none of us remember how he drives (click here for recap).  Needless to say, no one took him up on his offer and out we all went to trek in the frozen tundra!  We all moved our cars out of the lot and parked them along the side of the road.  As we sat in our cars, freezing are butts off, we waited for The Boss to move his car....guess what - he couldn't find his keys!  I couldn't make this shit up if I tried!  While we waited, I actually said to Drew, that I should write a book about the office (no one knows that I do this blog) and we both laughed; he said it would never work because no one would believe it.

The snowplow guy cleared the lot and the The Boss was finally able to locate his keys.  Once everything was cleaned out, we were able to return our cars to spots in the lot, trek back in and continue our day.  Remember, I wore snow boots...I was the only one!  They all mocked me, but clearly, I had the last laugh today!

How much do you want to bet we have to park on the side of the road again tomorrow and walk through the snow because "his friend" will not return and plow again today/tonight?  I reminded everyone to dress accordingly and bring dry clothes for tomorrow; I have a feeling we may need them.