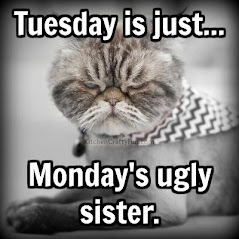 I thought this week would get easier as the days progressed, but Tuesday came in like a dark cloud.  I think I am in a rut - the weather is cold and it is dark when I drive home and dark when I get up in the morning.  I think sometimes it just makes me a bit depressed.

When I arrived today, it was good to see Frack swimming around his tank thoroughly enjoying his mere existence.  As you might remember, he had a roommate named Frick who met his fish-maker a while back.  I have considered getting Frack a new partner in crime, but considering how The Boss views our mascot, I think bringing another fish in will push him over the edge.   I fed Frack and noticed that I will need to clean his tank again soon.  I will have to schedule it when The Boss isn't around so I don't have to hear him complain about the noisy fish tank again (click here for recap).

I noticed that Wayne had had his stitches removed and is back to full duty (click here for recap).  Wayne being back to full duty is both a good and bad thing.  It is nice to have him available, but when he is available, you never know when he might hurt himself again.  I have considered purchasing one of those signs where you record the number of days without an accident  but I think that would offend some people here in The Nuthouse.  Truth be told, I don't think we would ever see a number above 20 as long as Wayne is employed here.

The Boss is still on his canned tuna kick - the office now consistently smells of tuna.  I guess tuna is high in protein, but tuna out of a can cannot be very tasty.  Speaking of becoming a better version of yourself for 2021 - I joined Beachbody over the weekend and last night was my first workout.  I am embarrassed to say that every part of my body is sore today!  I haven't mentioned it to anyone at The Nuthouse - everyone is too overwhelmed with The Boss' new fitness regimen.  He never misses an opportunity to discuss his new eating habits or plans for exercising after work.  Lord help us, it's like he has found Jesus, but "exercise Jesus".

The Boss' "friend" came in today; you remember, the guy who "plowed" us out three days after the snowstorm (click here for recap).  Well, you will never guess why he visited...yup, he was looking for payment for his wonderful work!  The Boss asked me to cut him a check - let us hope we don't get any more snow this season because my world would be complete if I never saw this a-hole again! Don't worry, The Boss made sure he was well aware of his new interest in eating correctly and exercising.

Well, that wraps up Tuesday in The Nuthouse.  I hope you week is going quickly and you are as happy as Frack is swimming around his little two-gallon tank.  Until next time....