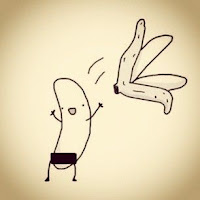 Hello and welcome to FRIDAY!  I'm sure I am not the only one overjoyed to see this week come to an end and what a week it was.  Throw off your banana peel and lets get this recap out of the way so we can start our weekend!

As I predicted, the rest of my week has consisted of preparation for the trade show I told you about in my last post.  I am not exaggerating when I tell you that I inquired about what staff would be attending the show at least 25 times.  The Boss promises me that he will have an answer for me on Monday morning.  I told him that if he doesn't come up with some decisions soon, his staff would be flapping their arms to get there and then sleeping on the Las Vegas strip.  We will see when Monday comes around if I am making plane and hotel reservations  - I hope for the attendees sake he is able to decide.

I was able to get a partial list of materials that are going to be exhibited in our 10' x 20" space (The Boss actually wrote it down for me).  I have started working with the warehouse staff to get samples/materials made that hopefully will look perfect.   I was told by Adam, that Wayne (remember - no eyebrows), would be making the samples and I should talk to him directly.  This confused me since Wayne hasn't even been here as long as I have, and he is going to make the samples???  I shouldn't be surprised, as I have mentioned before, Adam has one speed - slow and he is not very conscientious about doing things in a neat and orderly way.   I don't think he wants the responsibility of making "perfect" samples for an exhibition.

Today, I spent some time in the warehouse with Wayne.  Just for the record, his eyebrows have started to come back in and he looks even stranger then when they were totally missing.  Do you realize how difficult it is to look someone in the eye who have burned off their eyebrows?  Trust me, I do not recommend it - it's disturbing!

Now, back to Wayne; first, let me say again that he seems to be a very nice guy, but he is still quite fidgety and jumpy.  When I started to discuss the items that we were going to need, he became a total "yes" man.  I would have been a bit more comfortable if he had asked some questions, but right now he is leading me to believe he knows exactly what I am talking about.  That's comforting because I don't totally know what I am talking about - thank goodness he is here!

As the meeting progressed, Wayne seemed to be relishing in what he felt was his newfound responsibility.  He was "sample man" and he had a very important job plus time was of the essence.  That's when the problems started.

He started to get a bit more fidgety, but also with a bit of swagger (as much swagger as a jumpy man with no eyebrows can be).  This combination turned out to be quite a dangerous mix.  Close your eyes and picture this ....He was trying to act "cool" and started to walk backward, when doing so, he bumped into a table, at the same time when he put his hand down to steady himself it landed directly on a hot branding iron..  Now, these branding irons have to be at least 300 degrees F.   As you can imagine, he let out quite a yelp and jumped away from the table.  This action brought an entire stack on empty cans crashing to the ground, creating quite a racket and mess, not to mention the skin was now peeling off of his palm.

The Boss heard the crash and came running out to see what had happened.  When he saw the mess and the injury, he just shook his head and went back to his office.  Alex drove Wayne to the insta-care clinic (they might need to give Wayne preferential parking there); he is going to be okay and will need to keep the wound clean and dry.  I think my next meeting with Wayne should be in an empty room, maybe with will both be safer that way.

While Wayne was gone I took it upon myself to order an extra large first aid kit for the office - if Wayne continues here, we are definitely going to need it.  I don't know if he will still be "sample man", only time will tell.

Have a great weekend and see you on Monday!
Posted by Nutty Wone at 1:37 PM