Well, Someone Thinks Quite A Lot of Himself 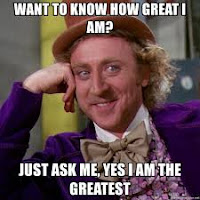 It has been apparent for some time now that a certain person in The Nuthouse thinks quite highly of himself.  No, I am not referring to The Boss (although, he does hold that belief too).  In this case, I am referring to our in-house, come over to team god, salesperson Mike.  Mike has been with the organization the longest and is under the strange impression that longevity is somehow equivalent to intelligence.

Mike is a funny bird, since is under the impression that he has a high level of intelligence, he has a tendency to speak down and be demeaning to others.  As you can imagine, this type of behavior doesn't go over well in a small company.  I wish I could post some of the emails that he sends to current and potential customers.  There are numerous spelling errors (yes, he will utilize spell check, but I think he has added the incorrectly spelled words to "his dictionary" so now the program just ignores them), he doesn't know where to use a comma or realizes that a sentence needs a period to end.  It is just ugly and honestly isn't a good look for the organization.  The ironic thing is that Mike has told me on more than one occasion that he achieved the highest SAT score in his entire class.  I am curious what that "class" consisted of thus allowing him to obtain the highest score, but that topic is something to investigate at a later time (my money is on a class of monkeys or donkeys).

In the past, I have not said much about his sh*tty communication style because I didn't think anyone really noticed (my excellent hearing and sensitive "bullshit meter" is a curse), but it all changed today after Mike left his office for lunch.  He had no more than cleared the front door when Drew says under his breath, (but actually loud enough for everyone to hear), "what exactly is wrong with that f'in guy?"  I immediately knew what he was talking about and I laughed out loud.  It was on like Donkey Kong -  a long roasting of Mike while he was away from the office.

Drew told the story of how Mike has a habit of acting like he is his boss.  He will frequently ask questions about upcoming jobs or if certain orders have gone out the door.  Drew said initially he thought he was just being friendly, but quickly learned that there was more to it than just being nice. He said he has now taken to just ignoring him and fortunately, Mike will lose interest and move to something else.

Rachel told a similar story, but added that Mike had gone around her and contacted her customer directly to discuss an upcoming order they were going to place.  She said after discovering the contact, she met with Mike privately and asked why he would do such a thing and Mike responded that he thought she didn't give the customer the correct product.  When she pointed out that she had, he backtracked a bit and said he was just looking out for the customer.  She told him to stay away from her customers otherwise she was going to take it up with The Boss. She thinks it may have worked, because she hasn't noticed any interference lately.

I then told them my favorite Mike story; the story that still makes me laugh when I think of it.  It happened not soon after I started here as a mere temporary worker.  I heard him speaking on the phone and he stated that "when all was said and done, he wanted to leave this earth having made a mark in this industry."  Now, I know that I have been very vague about what we do here. We are a manufacturer of products and nothing more.  What we do is important, but in the great scheme of things is not going to change the world.  I don't foresee a day when future generations are sitting around and discussing the positive and life altering things that Mike accomplished while he was working at The Nuthouse.  My god, you are not Steve Jobs; get over yourself!  The only mark you will be leaving behind are skid marks in your skivvies!

I have a feeling that there will be more office stories of Mike being discussed between the employees in the future.  Sometimes us The Nuthouse employees get tired of just discussing The Boss - you know what they say, variety is the spice of life.

Have a great night Nutties!
Posted by Nutty Wone at 4:52 PM