The Wildlife Continues Its "Attack" On The Boss 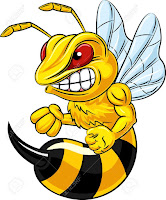 It was a sunny and warm day in the Nuthouse neighborhood today. The birds were singing and the geese were roaming, much to the disgust of The Boss.  The wildlife really seems to enjoy our quiet location and today was no exception.

When returning from lunch, I noticed a hole in the ground that had bees arriving and departing like Grand Central Station.  It was located to the right of the walkway into our main entrance.  I just walked by, went into the office and then made the mistake of mentioning what I saw in the vicinity of The Boss.

Although, he claimed, “he was so busy, he couldn’t see straight”, he had to investigate these bees!  Next thing I know he going outside to watch this hole at least, every ten minutes.  I then watch as he goes outside and proceeds to use his foot to cover the bee hole with dirt.  Anyone who knows anything about bees can attest that this is NOT a good idea.  These bees were now very ANGRY.  He goes outside, yet again, to wave his sport jacket around because the angry bees are flying about like crazy.  Could this be because a giant just stepped and crushed their doorway and tried to bury them alive?  Some time passes and he once again fills up the hole, that had reopened, with additional dirt.

He finally seems to have lost interest and decided that his time as an apiarist was done.  I guess the bees were no longer bothering him.  I must admit, the employees have watched this display with morbid interest (will he get stung?  If so, how many times?), but one thing is now quite apparent; no one can leave the building through the main door tonight unless they are wearing a bee keepers outfit.

Oh, no!  He comes Fed Ex into the parking lot with a late delivery and of course the delivery driver is painfully unaware that he will be walking by a location teeming with angry bees.  Before we were able to warn him, he ran up the walkway and was stung three times!  We signed for the delivery and I escorted the driver out another door – safely away from the bees.  I felt badly that we weren’t able to warn him in time, but I also failed to disclose that our leader was cause of the aggressive bee situation.

Now, the best part -I returned to my desk and The Boss emerges from this office to state he couldn't understand why the bees attached the Fed Ex driver.  HE IS INSANE!
Posted by Nutty Wone at 4:53 PM