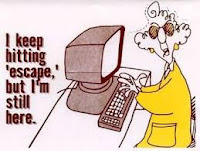 Yup, I'm still here, alive and kicking!  To be honest, I just wasn't interested doing ANYTHING yesterday.  That included working, cooking, new blog posts, etc.  I spent the entire day on the couch watching movies on Netflix.  Rest assured, I did shower and put on clean clothes (please, people - I am not an animal).  After my total day of sluggery (now, I know that's not a word, but if it was, it would mean the act of be being a slug), I had a renewed interest in doing things (actually, anything) today.

I woke up early this morning, showered and took Cooper for a long walk.  He was quite appreciative because not only did he miss out on some walks yesterday (yes, sluggery), but the weather is also quite lovely here today.  I had an extended play session with Milo (he is a master of string play) and fed him his favorite food.  These two tasks alone assure that may be on his"good" list today.  Let us hope he and Cooper will be kind to each other today - one can dream, can't they?

I made some work calls and not surprisingly, had to leave messages.  I wonder if people are still checking their voice mail because I don't get many return calls.  I spoke to The Boss on a couple of occasions and he seemed a bit out of it - very low energy.  Again, I wonder if he taking some sort of medication to handle the monotony of this lock down. I hope whatever he is doing is working for him.

I have a nice (and healthy) dinner planned and I might even start a new book.  I feel like I accomplished way more today than yesterday!

We have a Zoom conference call scheduled for tomorrow late morning.  I spoke with Drew and encouraged him to dress "appropriately" for the call and sent him the picture below as an example.  I think it is just the comedy that everyone needs right now.  I don't think he has the balls to do it, but I'll let you know if he takes my advice.  Until tomorrow! 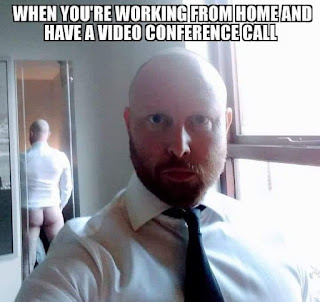