We Are Ready To Move Our Offices! 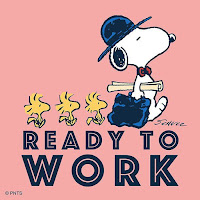 I woke up this morning with a spring in my step and a smile on my face!  Today I was going back to The Nuthouse to help facilitate the move to our new facility.  I showered, got dressed and ate my breakfast.  I must admit, Cooper and Milo looked a bit confused.  I can only imagine what they were thinking....had their owner finally lost his mind?  Why is he getting dressed in "normal" clothes and not sharing his breakfast with us? Does this crazy person think he is going someplace today?  What about my walks???

I made my way to the office and on the way picked up a couple of boxes of donuts and some bagels.  I thought the sugar and carbs would do us all some good; you know it's been a while since any of us have put in a hard days work!  I arrived and the warehouse staff was already there cleaning up the few orders that had come in over the past few days. Then in a matter of minutes everyone else arrived, including The Boss.

It was quite obvious that he was keeping his distance (probably ten feet instead of six), but, all in all, I think he was happy to see us all and was appreciative that we were willing to come in and assist with the move.  The donuts and bagels were a hit and as we all had breakfast together we outlined the plan of attack.  The warehouse would be the last items packed up and brought over to the new facility.  As it currently stood, much of the office materials (short of the office equipment and desks) were packed and already in the trailer.  We would move the office furniture and equipment on the trailer (which would be about all that would fit) and then call the trucking company to come pick it up and drop it off at the Hobbes Street location. Everyone knew and agreed to the plan and we figured we could have everything loaded by 3 PM today and ready for pickup.

We were making great time and the contents of the office were quickly being loaded into the trailer.  The saying that many hands make light work was very true today - we were all proud of how well this was going.  The Boss spent most of the time in his office (he said he had work to do???) and everyone was pleased he was not around to "help".

By 1:30 PM, we couldn't load another thing on the trailer and Rachael phoned her contact at the trucking company to see what time they could pick it up and transport it.  They couldn't make it today, but said they would be there first this tomorrow morning.  We ended our day with lunch brought in by The Boss along with beer and wine.  He said we deserved it for all of our hard work.

Our plan for tomorrow is the warehouse staff will come here to meet the trucker and the rest of us will be at the Hobbes Street location awaiting its arrival to begin the process of unpacking.  I am surprised to say that although The Boss wasn't around very much today (he stayed in his office), the interactions we had with him were quite normal.  Has this quarantine mellowed him out and made him ....normal???

Let's be honest, one day of being normal does not count in my book.  Let's see how he is tomorrow during the unpacking and placing of the office stuff.
Posted by Nutty Wone at 7:41 PM