Today, I Consider Myself a Paid Observer 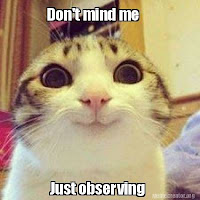 It's been pretty quiet the past couple of days.  I haven't heard much from The Boss since our conversation when he didn't remember locking himself out of his office.  I cannot say that it has broken my heart!  I do have to say that I am so appreciative that I still have a job and I am still getting paid.  That being said, people still annoy me.  Excuse me, I am a grouchy human.

Late last night, a group email was sent by The Boss stating there would be a conference call tomorrow (today) for all staff.  I wasn't sure what the topic was going to be, but it was scheduled for lunchtime.

Lunchtime arrived and it was Zoom time.  Everyone was there and I am embarrassed to say, I really wasn't interested at all.  I have been in some sort of funk the past couple of days, but who knows.  Once everyone was there, The Boss brought us up-to date on the status of the new building and let us know the internet and phones will be installed next week.  He asked if I would be willing to go to the building to meet them and I agreed.

As the call continued, I found myself enthralled by the various back drops of where each employee  was participating on the call.  Why haven't I noticed this sooner?  I quickly found myself tuning everyone out and concentrating on each employees homes.  Now, I have never been to any of these homes personally, so I realize I am only seeing a small sliver of their domicile.  Don't worry...I'm going to hook you all up and describe them.  As you can imagine, I didn't/couldn't take an actual  screen shot- I had to protect the insane...I mean innocent.  Here are my thoughts, in no particular order.

The Boss - it looks like he takes his video conference calls in a home office.  I believe I saw diplomas on the wall and I may have seen a sign that said "worlds best dad".  It's exactly what I (or anyone else) would imagine the area would be.  The desk seemed organized and tidy.  Is that a replica of the deceleration of independence on the wall???

Mike - If I were to guess, Mike uses an extra bedroom as his home office.  I believe I saw a single bed, with a weird looking comforter.  On the walls of this room look very religious.  I can easily see Jesus and a very large cross.  Nothing like "the big man" watching while you work.

Drew - Surprisingly enough, it looks like Drew was taking his call in his garage.  I guess I am not really surprised by this.  I'm sure in his free time, he is putting something together or fixing something.  I wouldn't be surprised if The Boss relocates to his garage for the next call we have.  Anyone want to get in on this action?

Wayne - Wayne was broadcasting from his kitchen today.  It looks like a normal kitchen except for the large cross hanging on the wall.  I cannot be sure, but if I were a betting guy, I would say it is the same cross that is hanging in Mike's spare bedroom.  Oh, the questions this brings up.   Are they the same cross?  Did they shop at the same store?  Did they buy them at the same time?  If so, did they get a discount?

For those of you wondering, I have a home office set up in my extra bedroom.  I do not have religious symbols on the wall and it is quite a boring room if I do say so myself.  The room doesn't have a bed, but does have a dog bed that Cooper and Milo scuffle over to take naps.

I have big plans tonight - I'm going to watch The Gentlemen.  I love a Guy Ritchie movie and this one had pretty good reviews.  Until tomorrow Nutties!