Did You Know That Plastic and Heat Don't Mix? 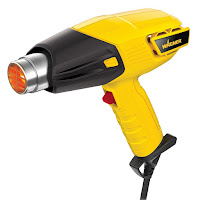 We are settling in nicely to our new surroundings, but today The Boss attempted to burn the building down - just another Wednesday!  You know those heavy-duty plastic mats that you put on the floor to make your chair easier to roll?  Well, The Boss needed one so moving his chair would be not only easier, but also offer some protection to the carpeting below.

We ended up placing an online order for six of them from our office supply store about a week ago.  This way everyone in the office and the receiving desk in the warehouse could move about freely.  We were happy to see that they arrived today - they were rolled up in boxes.  I passed them out and everyone unrolled and placed them under their chair.  Since they had been rolled, we all found something heavy to place on the corners of the mat to weigh it down.  We figured it would only take a day or two until they would lie flat on their own.

When I say "we all" I actually mean everyone except The Boss.  How could he waste the time to do what everyone else was doing?  He is The Boss and much smarter than us - he had a better idea!  I saw him walk into the warehouse and return with something that looked a bit like a drill, but I really didn't get a good look at it.  I went to his office and I quickly discovered that he not obtained a drill, but rather a heat gun from his warehouse trip.  He decided that he was going to use this heat gun to aid in the unrolling process.  From my previous experiences here, I knew this had disaster written all over it - it was just a matter of time!

He started by sitting in his chair, hunched over with the heat gun passing it back and forth over the rolled areas of the chair mat.  This went on for almost half an hour and to be honest, I didn't notice much improvement in the flatness of his mat.  I could tell that he was quickly losing interest in this task (A.D.D. anyone?) and I thought he was going to give up and follow the crowd by placing a heavy object in each corner of the mat.  I guess in that minute, I had forgotten where I work...

He exited his office and returned with four large books - but no, they were not for the corners of the mat, Nutties; they were to prop up the heat gun so he didn't have to hold it any longer.  After he arranged the heat gun on the books aiming it towards the rolled mat, he then walked out of his office and returned the warehouse (I would imagine to brag about his brilliant idea).  After about five minutes a peculiar smell enveloped the entire office area - it was clearly, melted, burning plastic.  I immediately ran into his office and saw his set up, but it looked a bit different than he originally left it.  Now his mat had a charred, circle shaped hole where the heat gun burned completely through.  Melted plastic had also dripped on the very carpet he was attempting to protect with said mat and there were black char marks on the top book.  I immediately unplugged the fire stick and waited for his return.  He came in from the warehouse and actually asked what the smell was - no one looked at each other or said a word.  He went in his office and found his mat, which now had a burned hole in the middle, and said ABSOLUTELY NOTHING!  He then took the books and put them on the corners of the mat and went on with his day as if nothing happened. Fortunately for us it was a fairly nice today, because every window and door in that office had to be opened to allow the stench to dissipate.

On a side note, I have to admit, each time I hear him roll over the part of the mat with the burned hole and his one chair wheel falls in, I can barely contain my laughter.  I have a feeling this is going to amuse me for a while.  It's the simple things that keep me going!

Did I mention that we still do not have a dumpster on-site?  I also noticed today, that The Boss is now bringing his garbage in from home.  He brings it in the office and just adds it to the pile in the warehouse - WTF!
Posted by Nutty Wone at 3:21 PM