My Cat Is Plotting My Demise 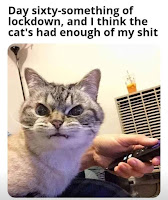 In the past, I know my cat Milo has not been the most enthusiastic about my presence here at home. He has given me some shifty eyed looks and seems to be annoyed when I enter a room he has claimed as his own.  Yup, he honestly believes that the world revolves around him and that Cooper and I are his loyal servants!

Today, everything got real!  There is no question that he is sick of my sh*t as the meme above illustrates.  This morning I ate my breakfast and it was time to feed my boys.  I got their bowls ready and as I went to the cupboard, I immediately remembered something that I had forgotten a few days ago.  Milo was running low (and was now out of) kitty kibble!  Now, Milo does not eat kibble as his main source of nutrition - he is a canned/wet food cat all the way.  But, he does appreciate a couple of pieces of kibble as a palette cleansing side dish.  It amounts to approximately one tablespoon of kibble each time he is fed - so clearly, it is not very much.  That being said, the cupboard is bare!

Now, I know it is my fault (who else could I blame), and I am unsure as to why I didn't order it from Chewy like I always do.  I guess my days are just running into one another and I lost track of my responsibilities.  I put the bowls down for breakfast and hoped he wouldn't notice.  Cooper quickly began eating like it was his first meal in months and Milo started to eat his canned food.   He then looked over to the kibble bowl, noticed it was empty and came over to the area of the kitchen that I was standing (hiding) in.  He sat down and stared up at me like....did you forget something?

I quickly began to spout my excuses and apologies to my royal king and begged for his forgiveness.  I said I would run out after lunch and purchase the biggest bag I could find  and this travesty would never happen again.  Milo clearly was not having any of it!  He continued to stare a hole through the middle of my head for what seemed like a good two minutes.  He finally blinked and continued to stare at me  - he looked at me like I had pulled my pants down and took a dump in his litter box.  He then gave me the cold shoulder and slowly walked back to his bowl.  He begrudgingly continued to eat his canned food and would look over to his kibble bowl every few bites.  I could tell he was pissed and for some crazy reason I really think he is going to get be back in a major way for this oversight.  I guess I will nap with one eye open from now on!

After lunch, I made a special trip to PetSmart to pick up a bag of his favorite kibble.  I also purchased a toy of each of them.  Hopefully, this will at least put me back in the good graces of my feline leader.  I brought the load home and he wouldn't even look at me, or the toy I picked out.  He is such a little bitch!  Cooper loved the toy and continues to play with it as I write this blog.  Milo needs to take some lessons from Cooper - let it go man!  So, you missed one tablespoon of kibble with your breakfast this morning.  Do you realize there are people who still cannot find toilet paper in the stores?
Posted by Nutty Wone at 4:26 PM