The Nuthouse Has Infiltrated My Parents Home! 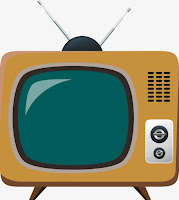 Allow me to preface this post by saying I love my Mom to the moon and back and I enjoy talking and helping her in any and all ways.  Just sometimes, she is as nuts as the rest of the mixed nuts I deal with....maybe it's me?  Plus, I think parent stories are hilarious!

As I have previously discussed, my parents live on the other side of the country.  We talk frequently by phone and now by FaceTime (serenity now!), so it is almost like I am there....almost.  Earlier this month, I was catching up with my Mom and she was complaining how my Dad constantly watches westerns on the television in the living room (and she also was quick to add that he plays the TV much too loud).  They have a TV in their bedroom, but it is in a WiFi dead spot of the house.  I have purchased them a WiFi extender (didn't really work) and asked her to move her router (she likes it where it is).  Unfortunately,  her entertainment of choice is watching movies on Roku and Amazon Prime - which  both require a strong WiFi connection.

I suggested that if she placed a TV in my old bedroom (which is closer to the location of the router) she might get a better WiFi signal and be able to watch what she wants.  I told her televisions were so inexpensive, it would be almost free to set up a "movie room" for herself.  She commended me on having such a good idea (why didn't she think of that, said asked) and she immediately started talking about how she didn't have an extra satellite box.  I reminded her that if she only watched things on Roku and Prime, she wouldn't need a satellite box for that - this TV would be for streaming only.  I should have realized right there that my life was going to get very complicated very soon, but I didn't even see it coming.

Fast forward to current time - I decided to turn my three-day Memorial Day weekend into a four-day event.  I was going to stay home on Friday and just chill out for the day.  My phone rang early in the morning and I immediately thought it was going to be The Boss - but it was my Mom.  She proudly told me that she had purchased a new TV and it had Roku already pre-loaded.  She was looking forward to hooking it up and being able to escape the loud wild west going on constantly in their living room.  She just wasn't sure how she was going to get the WiFi to the TV.  This was my first indication that my day off was not going to be relaxing.  I reminded her that WiFi did not need "wires" to work and that it will pick up the signal fine from my old bedroom.  She seemed to understand what I was saying and that is when she added that she was going to put the TV in her bedroom.

I think at this point, I cannot lie, I rolled my eyes a bit.  I said that she doesn't get a strong signal in that part of the house - that was why we talked about putting the TV in my old room.  Remember... having your own movie area, etc.  She again brought up the satellite box and not having one in my old bedroom. Serenity Now, Serenity Now!  I went over again how this was going to be for streaming only - Roku was pre-loaded and her Amazon fire stick could be plugged into one of the HDMI ports. She didn't ask me what an HDMI port was, but I have a feeling she was considering it.  She then asked if she could try it in her bedroom - maybe the signal will work better with this TV.

I told her anything was possible (always encourage, never discourage) and said it was worth a shot, she had nothing to lose.  I asked her not to unhook all of wires on her old TV (DVR, Satellite box, etc) until she was sure the Roku and Prime worked correctly.  I did this to stave off her forgetting where the wires for all her devices needed to go on the new TV.  I don't think I could handle that nightmare this weekend. She said that was a great idea and she hadn't thought of that.

We ended our call with me reminding her to make sure it worked for a couple of days - not just once, before switching everything over.  I even said to try it at different times of the day - but I don't think she was listening.  I think her brain was on overload trying to remember the things we discussed.  I then tossed a bomb I didn't even mean to do or realized I had.  I said, "if this works in your bedroom and you end up switching all of you equipment to the new TV, don't be surprised if you have to reprogram your satellite TV remote so it will work the box.   Immediately, there was complete silence on the other end of the phone.  I think I may have exploded her head with that comment.  Yup, I don't think this hell is over yet!

It is now Sunday morning and no additional calls....not sure if that is a good or a bad sign.
Posted by Nutty Wone at 9:11 AM