Today I Return to a Normal Work Day! 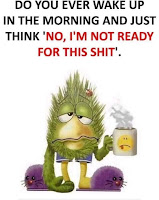 Well, this morning the timer counted down to zero and the "explosion" was the scary fact that I had to leave my comfy home and return to working in an actual office!  I thought I was ready and wanted this, but this morning I felt like the kid who was going back to school after a wonderful summer vacation. You remember those days, don't you? Yup, it sucked!

As I roamed around the house trying to find something comfortable to wear, my mind was flooded with reasons why I should stay home just a little while longer (not because of fear, just because I didn't want to go).  Is is really safe out there?  What happens if I catch something?  Is that a scratchy throat?  Can my Mom send a note to get me out of this?  I quickly began to accept reality - I was going back to work today!

When I arrived at our new offices, I saw that Alex and Wayne were already there waiting.  I unlocked the front door and so it began.  They went to the warehouse and I put my two bottles of Coca-Cola in the fridge.  See how well behaved I am?  I resisted bringing a bottle of liquor for my bottom drawer - I wonder how long it will be before I am sorry for that decision?

As I left the kitchen area, Drew, Rachel, Mike and Adam arrived - the gang was officially back together.  We spent some time catching up and looking around the new place.  I have to admit, it looked great and was ready for business.  As were were talking, my phone rang notifying me that I had a Face Time call.  Now, I had told my parents that I was going back to work and morning Face Time chats were going to be suspended for a while, but when I looked down, I noticed it was The Boss. Lord help me, the man couldn't call on the phone, he had to Face Time me (I think I may have rolled my eyes)!  I answered and he wanted to see if everyone had arrived and to let us know that he was coming it a little later. Well, I can rest easy now with that info!

We got ourselves situated and Mike finished organizing his office (I hope he keeps the door closed so I don't have to see his big-ass cross on his wall).   Around 1 PM The Boss arrived wearing a N95 mask and immediately began telling us we were sitting too close.  We were all at our own desks and had sufficient spacing between us, but he said we were too close (so it begins).  He then went in his office and closed the door (hey, there might be a benefit to this social distancing).  By 1:30 PM The Boss was clearly getting antsy; he was pacing in his office.  Remember, he cannot sit for long periods of time (anything over 8 minutes), but in this new environment, he clearly doesn't feel safe roaming around like he used to.  So, he decided he had to go the the post office and check the mailbox. Bye, Felicia!

As the end of the day rolled around, The Boss hadn't returned and the phones really didn't ring that much.  It was nice to spend the day with everyone and I especially enjoyed not having to hold my bladder until I returned home to use the facilities.  The concept of a clean bathroom is clearly wasted on those who have never been faced with using a bathroom like we used to have.

On my way home, I picked up a sub for dinner (I wasn't cooking tonight) and some treats for my furry boys.  I hope they missed me, because I really missed them!
Posted by Nutty Wone at 4:09 PM