I Didn't Do Much Of Anything Today! 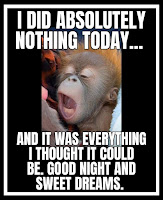 Well, I am almost embarrassed to say that I really did nothing today.  I feel comfortable admitting it here because I know you all will not be surprised by me saying it.  I did nothing and it was wonderful and might I say, glorious!  I did vacuum up cat and dog hair, but that doesn't really count since I do that every day.   I have also come to the conclusion that having to wear regular clothes (not workout gear) and going into an actual office is going to be quite a shock to my quarantined system.

Funny story; last night I had a craving for coconut macaroons (I know - strange), but I looked online for a recipe and found one that looked sooooo simple.  How could I mess this up?  I had all of the ingredients and I was feeling quite confident in my baking prowess!  I mixed the ingredients in a large bowl and they seemed a bit runny, but I had never made macaroons before, so what do I know.  I formed them and put them in the oven, setting the timer for the recommended cooking time.  They smelled delicious while they were baking and once that timer went off, I was ready to chow down!  I opened the oven and I did not have mounds of cooked coconut resembling what I had put in a mere 20 minutes before.  I was looking at a completely level layer of one, large coconut macaroon.  In the heat of the oven, they had all spread out flat.  I guess I created a new cookie - coconut macaroon bars.  They were flat as pancakes, but still tasted delicious!  Look out Martha Stewart, I'm coming for ya with my new creation!

FYI - I'm sure I will polish off the rest of the macaroon bars tonight.  Yup, I might need Weight Watchers after this quarantine - stop judging me!

Now the major question - I wonder what I can put off doing tomorrow?  Tune in and see what doesn't get accomplished.  Good Night Nutties!
Posted by Nutty Wone at 7:39 PM