Don't Worry, My Eye Rolling Is Back & In Perfect Form! 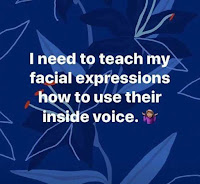 If you remember, when I left the office the other day,  I noticed that the lawn was in need of a good mowing and I also was wondering where our dumpster was.  When I arrived this morning, The Boss wasn't in yet, but he called and assured me he was on his way.  As a side note, I am not sure why he keeps me so apprised of his imminent arrivals.  I wonder if he feels guilty that everyone is here and he still is having reservations about his safety of being here.  I don't think anyone would hold it against him if he stayed home a bit longer.

He arrived around lunchtime (face mask on point) and went directly to his office.  After lunch, I called him on his intercom (safety first) and mentioned that our dumpster wasn't here yet and questioned if he had called them to have it transferred over.  Currently, we are putting the garbage bags in the corner of the warehouse and they are really beginning to pile up.  He said he had not phoned them but would in the next week or so (????).  I mentioned that garbage from the sales office and warehouse was really getting out of hand and questioned why we would wait a couple of weeks to have the dumpster brought over.  Now, I hope you are sitting down for this explanation - he said the garbage companies were closed due to COVID-19!  In my world, garbage removal has been considered an essential business and I personally have had garbage picked up at my home each week.  But, yes, according to The Boss garbage companies are currently closed! Wow - just wow!

After I finished shaking my head at that conversation, I knew I couldn't just stop there (yup, I am a masochist).  I asked if he had a company he would like me to contact about mowing the lawn and taking care of the landscaping around the property.  He laughed and quickly told me that he would be doing the lawn work at the office. For those of you new to this blog or do not remember, The Boss does not have a good track record with machinery (have forklift - will destroy).  What could I say?  I just said, okay, I thanked him and hung up the intercom.  This has disaster written all over it!

We left a little early again today and as I was walking out the door, I envisioned The Boss mowing the lawn...I laughed a bit to myself and am actually looking forward to the show (entertainment has been so boring during the quarantine)!  I know - I am an awful person and going straight to hell!