Are There Logic Bugs on the West Coast? 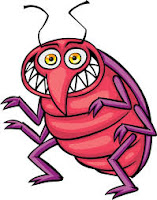 Today something happened that even surprised me and as you know, nothing around here seems to surprise me anymore.  I received a phone call from The Boss early this morning, checking in to see how the remainder of the day went yesterday.  I brought him up to speed on the orders that went out the door as well as those we have in process.  He seems pleased with the way things are progressing while he is away.  I was hoping that this update would have a positive cause and effect result on the number of phone calls I would be receiving the rest of the day (hey, a guy can dream).

Now, to the surprising part.  He mentioned that his original plan was to be moved and operational in the Hobbes Street property on March 1 (actually open for business on March 2).  He said he had been thinking about this timeline and he didn't feel it was "doable."  Wow, really???  Considering staff isn't flying back from Vegas until the 29th - how could that timeline not be "doable?".  Where did this nugget of logic come from?  I am beginning to think that he may have been bitten by some sort of "logic bug" on the West Coast.  I'm hoping it will be like Spider Man - once bitten by the logic bug, he will have super logic powers and be able to look at any problem or issue and come up with a solution (in a timely manner) like a normal person (again I say, a guy can dream).

After I picked my jaw up off the floor, I agreed that I thought the original deadline could be problematic and that extending the deadline  might be the right thing to do.  He then said he was thinking more April 1 to be moved and operational, but that date could be moved up once we see how the move actually goes. Wow, this must have been a powerful, manly logic bug and I, for one am in awe of  this infectious bugs powers! I am also praying that we have a East Coast version that I can have bite him if/when his logic levels start to diminish (yup, I am a big dreamer today).

I told The Boss that I have and will continue to pack up boxes and he told me additional supplies should be arriving tomorrow.    Good thing, because my initial supply is almost gone... there is actually a lot of stuff here!  Good thing the Hobbes Street property is larger in size.

I guess the show is going well and we have had a steady stream of visitors looking for additional information to be sent to them (that will also be my task).  Everybody is tired from standing all day and they remarked that we should rent the thicker padding to go under the rental carpet next time - their backs are screaming!  For those of you keeping track, I haven't heard any reports of noxious gas "leaks" at the event.