Have Forklift, Will Destroy! 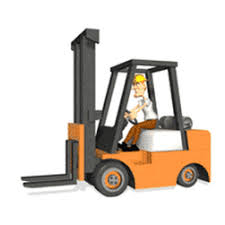 The Boss is constantly trying to look and act more masculine.  This saga has been ongoing since I arrived, but has really increased in intensity since he hired Drew.  As I had mentioned, Drew is the jeans and tobacco chewing type.  He likes to hunt, watch NASCAR and is seems secure in his manhood.  Now, The Boss is not really that type of person – which is not a problem to anyone but him.

Since Drew started, The Boss has continually tried to find common ground with him.  Which is clearly not working as well as he hoped, because they are two very different types of people with conflicting interests.  Sometimes I think The Boss wants to be Drew, but that’s a story for another time.  Now that you have this bit of background, this story will make more sense.

Today The Boss was walking around the office and mentioning he needed to use the forklift.  I think it was more of a general announcement to illustrate to everyone (Drew) that he is a Manly, Man!   I causally mentioned that I didn’t know he used the forklift and he snottily told me he uses it all the time.  Now, keep in mind, he could have asked anyone in the warehouse to do this task for him (well, almost anyone – I wouldn’t be brave enough to ask Wayne and fortunately he was absent today). Clearly, The Boss must have been a quart or two low on testosterone today.  Did I also mention he waited until lunch time and the guys were not in the warehouse to perform this task?

So, I guess he attempts to use the forklift.  During what I envision to be his short “ride” he created quite a racket that resulted in a folding table now crushed on one end and an empty rack being pulled away from the wall.  I did not see the destruction occur in real time, but I did hear it from my desk and wow, it was a powerful, manly noise!😁  When I went out to investigate, I witnessed only the aftermath and The Boss was nowhere to be found.  How did he get off and away from that forklift so quickly from the time I heard the crash and got out there?    I would have loved to see a video of him scurrying away from the scene of the crime.  It had to be hilarious!

Lunch is now over and the destruction was just waiting for the warehouse staff to return.  Alex came in to see me and asked what the hell happened in the shop.  I told him my suspicions but also mentioned that I didn’t see who actually did it.  He just laughed, shook his head and walked away.  Nothing more was said and Alex just cleaned the mess up.   The rack was re-positioned against the wall (Drew had to help) and the table although still operational, looks to have seen better days. Like it never happened!