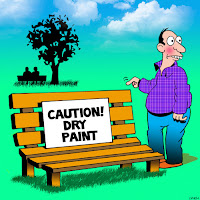 Today we used our lunch hour to go over to the Hobbes Street property.  None of us knew why we were required to go to the new building and no explanations were provided.  Deep down we all knew the real reason for the trip; The Boss wanted to show us the work he had done over the weekend.  If you remember, last weekend was paint-a-palooza!

So, we loaded into the company vehicle and Drew took his own truck because he said he had an errand he had to run when we were done.  Right Drew - we all knew the truth; it was so he could escape if our trip took too long. Well played Drew, well played!  You are smarter than you look, grasshopper!  As we drove down the pot holed, dirt road, I asked when the road paving was scheduled to be done (I figured once it warmed up).  The Boss quickly commented that we would not be paving the road - we didn't want people to know we are back here. ???? What?

As we all lumbered up the walkway, I noticed spots of the blue paint on the ground.  Wasn't this paint supposed to be on the walls inside the building...how the hell did paint get out here?  Well, my questions were quickly answered as we walked through the door.  It looked like a bomb had gone off.  Drop cloths were still dropped everywhere and covered in paint, the large brush and roller was leaning against the wall and a can of paint was opened, half full with a dried film on top.  As I took a quick survey around at the walls two of the four in the large room did not look like they had even been painted. Why, you may ask...because there was no paint on the ceilings above these walls and they didn't look quite as "fresh" as the other two.  I asked if the job was finished and he assured me it was....and remarked, didn't it look great! Yup, it looked like a troop of monkeys had some paining fun!

We all nodded our heads in agreement.  Alex and Wayne then quietly collected the debris (drop cloths, paint and supplies) and wrapped them in a clean drop cloth.  They were then loaded into the company vehicle, brought back to our offices and disposed of in the dumpster.  This was our trip to Hobbes Street today; we did nothing else while we were there today!

Remember - move in and operational by April 1.
Posted by Nutty Wone at 3:41 PM