Monkey Movers Are Open For Business! 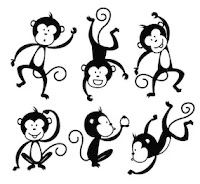 All the monkeys reported for work today, except The Boss who decided he would be working from home and is currently practicing what the CDC will soon call "extreme social distancing."  He has assured us that he is closely monitoring the virus situation.  I not only feel better but calmer now, don't you??

Things around here are status quo, everyone in the office is calm and we all are taking the proper precautions; except for maybe Drew....I don't think he ever washes his hands (even after using the facilities).  Mental note, I guess my social distancing circle will have to be a bit rounder in circumference around him.

I have never discussed it before, because the list of peculiar things The Boss does is so long, but The Boss is ALWAYS purchasing toilet paper.  Now, I don't mean just recently in the face of the virus, but he always has done this.  When I first arrived at The Nuthouse, I noticed there were three warehouse sized packages of TP on hand.  Even with this stock pile, it seemed every time The Boss went to the store, he came back with a package of TP.  Sometimes just four rolls, sometimes 12, but it was always included in the store run.  This is working to our advantage now since there is not square to be spared (see that Seinfeld reference right there)  in the stores right now.  Could The Boss have known something and been preparing?  No, don't be silly; as they say even a broken clock is right twice a day!

One of the downsides of the happenings in the world right now is that our orders have slowed down.  Now, if you look from another angle, this might not be a bad thing since we have a big move coming up.  As we were discussing the orders in process this morning, we came to the conclusion that maybe we should start the move today.  As the employees who were in Las Vegas reminded everyone, The Boss is more of a hindrance than a help when facing a project.  So, it was settled.... we are starting to move non-essential materials to the Hobbes Street location during this time of limited quarantine!  I already had a bunch of boxes packed, so Drew quickly loaded them into his pickup truck and away he and Alex went to drop them off.  The Monkey Movers are in business - print up the business cards!

Drew and Alex returned with an empty truck and wanted the rest of the warehouse staff to go on the next trip over.  When I asked why he needed so many bodies, he said that I didn't want to know.  Of course, I did... and he finally told me.   The warehouse crew and Drew are going to pull that behemoth of a display case/shelving out of the main front office and put it in the warehouse.  He made the executive decision that we don't want, need or have room for that in the office space we are all going to be sharing for the time being.  He said lets just move it and ask for forgiveness later from The Boss.  Brilliant!!

OMG, we are actually starting this move and according to the calendar, it is before March 30th!  I cannot wait to hear what The Boss has to say once he discovers what is going on.  On another note, I think Drew is going to fit in just fine - now we just need to get him to wash his hands!
Posted by Nutty Wone at 3:20 PM