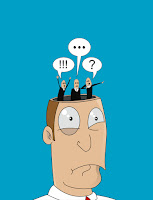 Considering it is a Monday and the first day back to work after Daylight Saving time, the day wasn't that bad.  Sometimes I find it interesting to be a fly on the wall here in the Nuthouse and listen to the comments and questions that come from the people who reside here.

- Drew is thinking of putting in a pool.  He knows The Boss has a pool and asked who his installer was and if he was happy with the final product.  The Boss gave Drew the company name and couldn't say enough nice things about them and their work.  One hour later he told Drew his pool liner has a wrinkle and two different realtors have told him that the wrinkle has greatly diminished the value of his home. It must be quite a wrinkle!

-  The Boss provided reports to everyone (at different times of the day) about his painting project at the Hobbes Street property.  Some people he told he worked all weekend and others (specifically Drew) he told he painted the whole thing in two hours.  He really wants to impress Drew!

-  Adam wasn't in the office today, he has a cold and thought it best to stay home.  The Boss is now actively looking for his face mask from when I was sick.  Maybe he should just bring his heavy duty respirator from his painting project.

-  Mike and Wayne spent two hours today discussing the good works of the lord.  At the same time, they spoke poorly about members of their congregation.  Yup, that's why I love religion; do as I say, not as I do!

-  Alex just continues to do what needs to be done to get the materials out the door in a timely manner.  He keeps to himself and does what he is supposed to do.  Refreshing!

-  I think Rachel may have a crush on Drew; she seems to be acting quite "giddy" around him lately.  Stay tuned for updates...

-  I continue to fight bronchitis and my medicine is almost gone.  I still have the cough, but am still successfully convincing The Boss that it is allergies.

The Boss has told us we are going to the Hobbes Street property tomorrow - field trip!  I'm not sure the reasoning for this, but I cannot wait to see how it looks after the weekend paint job.

Perfect quote for today - Don't tell people your plans show them your results
Posted by Nutty Wone at 4:40 PM