Put On Your Hard Hat - The Boss Is Doing Some Renovations 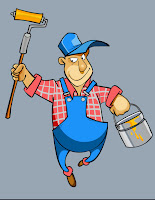 Welcome to the Nutty, HGTV version of "Flip or Flop" Wednesday!

Today The Boss has a bee in his bonnet about the Hobbs Street property.  (If I were a betting guy, I wouldn't think our scheduled move would enter into his mind until at least March 27th).  He wants to paint, rehab, etc. prior to move in.  This is actually a smart plan - it much easier to do these things prior to moving all of our crap in.  Kudos to The Boss for thinking ahead! (maybe that logic bug venom is still working)

He then proudly announces that he will be performing all of these tasks himself.  This is where the warning flags go up and I start to get concerned.  As I have alluded to in the past, The Boss is not really the 'fix it' type of guy, but he is determined.  He has gotten paint chips from the store and will now poll all of the employees as to what color we should paint the front room, two connecting offices and two restrooms (they are currently baby blue).  Without even seeing the chips, I mention a neutral, business-like color such as cream, off white or even a light beige would look great and even make the spaces look larger.  Surprise!  He didn't even pick up chips representing ANY neutral shades.  He has chips of more versions of light blue, a much darker blue, a dark brown and even a kelly green!  Could this man is color blind?  That would explain a lot - remember, he believes that color blind people do not have a sense of smell. That would help explain why he isn't affected by the noxious gasses emitting from his hind quarter!  It all makes sense now!!!

Rachel agrees with my comment on neutral colors and Mike and Drew just tell him to paint it whatever color he wants - they don't care and it doesn't matter.  So, after three and a half hours of The Boss walking around, taping chips to wall and endless discussion (no, I am not exaggerating!), he leaves to purchase the paint (hallelujah). No, he hasn't actually decided on a color; he says he will make a final decision once he gets there (oh, this is getting more interesting by the second).

When he returns from his jaunt, he is holding two gallons of paint in hand (yup, two gallons!  I guess his math skills were not in peak operating form when he did the coverage calculations).  What is the final color, you ask?  He has brought back the exact same color that is currently on the walls.  Way to think outside the box and we'll never get that three hours back!

I wonder what he is going to do first - paint or the "rehab" he keeps bringing up (no, I have no idea what he is planning to rehab).  My guess, this is bizzaro world, so you always paint first, then rip things apart .  We here at the Nuthouse wouldn't do it any other way!
Posted by Nutty Wone at 3:00 PM