Can You See Me Now?? 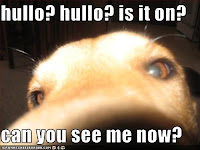 Today was my most difficult since the quarantine started.  Today, I tried to talk with my parents thorough FaceTime.  I know what you are thinking - why would you put yourself through that pain and suffering?  Why would you start your day off with such a task?  Do you like poking yourself in the eye with your own finger (because I was sure this is what this task is going to feel like)?

As I mentioned, my parents live a couple of time zones away and since I have been working from home, they have started phoning me every other morning.  I decided that today was they day we were going to FaceTime, rather than just converse on the phone.  I wanted to see them (to make sure they were okay) and I know my Mom doesn't believe that I have been eating properly - so we could kill two birds with one stone as they say.

During previous conversations, I had talked with them about how FaceTime works and they seemed eager to try it out.  So, this morning, I rang them up (they don't have cell phones, just a land line) and told them that I would be calling on FaceTime.  We hung up and I called them on FaceTime - it just rang and rang and they didn't pick up.  I phoned them again to see what the problem was and they said their phone never rang.  Ughh....I am embarrassed to say, I believe I rolled my eyes (sorry, Mom) and reminded them that the telephone would not ring, it would be their IPad.  We disconnected and tried again.  Again, it just rang and no one picked up.  Just then, I began to question my decision making for the day.  Should just speak to them on the phone and be happy with that?  Why am I going to get annoyed trying to make this work?  But, I went against my better judgement and soldiered on!  This task would not beat me!

I phoned once again and after some discussion we discovered that the volume was turned down on the IPad, so no one could hear the ringing.  My Dad then proceeded to tell me he is always telling my Mom to turn "that blasted thing" down because it is drowning out his radio (I am in parent hell right now).  I rang FaceTime once again and hallelujah they answered!  Now, I thought the rest would be easy....but no, Nutty Wone does not get off that easy!  Now the fun can begin!

First off, they were so happy to see me!  I, on the other hand, am sorry to report, that I could not say the same.  I was happy with the idea of seeing them, but for some reason, they wouldn't just leave the damn IPad in one place and sit in front of the camera.  They each felt the need to hold it to speak with me.  With each equipment trade off, I became a bit more dizzy.  Each time they held it I would get a great view of their shoulder, the living room ceiling, the coffee table and I even got the opportunity to see the arse end of their cat Oliver (FYI, Oliver needs to pay a little better attention to his back end).  I tried telling them that I couldn't see them, but they were too busy talking over each other to tell me about their lives since our last conversation.  I finally gave up and was able to check out the things in my old house while they told me their stories.

After about an hour, I think they felt better because they were able to see and talk to me (and my Mom believes that I am eating properly).  I also liked being able to talk to them, even if I couldn't really "see" them.  I think a couple more lessons and some more screen time and they should be experts!  We will try this again - once I recuperate from this attempt!

Tomorrow, I escape quarantine and go to The Nuthouse!  Is it insane that I am looking forward to going there???  Until tomorrow!