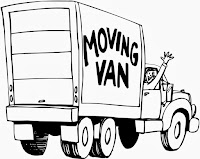 Let me tell you, when The Nuthouse puts their minds to something, that sh*t gets done (it also helps that The Boss still isn't here)!  That extra large display case in the main, front area, was no match for the warehouse staff!  That thing was out to pasture before you could say heave-ho!  I actually think the warehouse staff may be able to make use of it in a much more productive way that we ever could - at least that will be one of the talking points I bring up to The Boss.

Rachel had a great idea - she suggested that rather than load a pickup truck numerous times and drive back and forth, we could contact some of the freight companies we do business with and see if they could let us borrow or even rent a trailer.  We could then load it up and have it delivered all at one time.  Brilliant!  She phoned a freight company that we work with frequently and they were more than happy to help us out - free of charge!  They will bring the empty trailer, drop it off at the dock and we can load at our convenience.  Just like having one of those moving PODs in your driveway - only much larger (and free)!

Clueless or not, I think if we are going to have an empty trailer parked at the dock, The Boss is going to notice.  We have to tell him what we are/have been doing.  I have drawn the short straw to tell him what the Monkeys have been up to while he has been home monitoring the virus.  I decided that I am going to hold off until the trailer is delivered.  As was the motto yesterday - just do it and ask for forgiveness later!

Lucky me, the empty trailer was delivered late in the afternoon (damn, they are efficient)!  We, of course,  wasted no time in starting to load it up.  We decided if our stuff was already in it when The Boss finds out, he would not be as apt to send it back (see, always thinking)!  We quickly realized this trailer was the smartest idea ever!  We really are going to be able to get a bunch accomplished in a short period of time.

As the day came to a close, we were all quite happy with our progress.  The Boss only phoned twice today and not a word was said about moving.  I guess I know what my first call in the AM will be - time to come clean to The Boss and let him know what The Nuthouse has been doing in his absence. 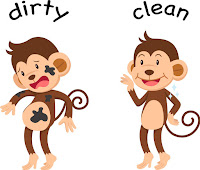